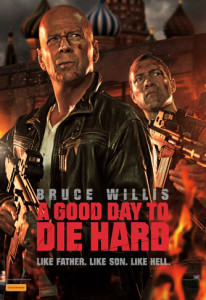 Look out Russia. Forget the goodwill built over the past decades since the Cold war with US that had the globe on the edge of world war. John McClane (Bruce Willis… duh) is vacationing in Moscow, and he’s decided it’s take your trained killer son to work day.

Forget drama. Forget intrigue. Definitely forget plausibility. This is a blow shit up good film. And if you need someone to blow shit up good, call the guy who has had buildings fall down around him, aeroplanes fall from the sky on top of him and had trucks careen out of control with him standing atop them. Between them McClane and son Jack (Jai Courtney) put a dent in every vehicle in Russia, then follow this up by ventilating every second male citizen, all in a neat and noisy 90 minutes.

Estranged son Jack has fallen afoul of a situation, trapped between good and bad Russians and the walls of a high security prison. McClane Sr cares not for who is naughty or nice, he wants to save his son and take him home. Rekindling the father / son relationship might be a nice bonus.

As tends to happen in McClane infested territory, all hell breaks loose shortly after his arrival, leading to a long and collision filled chase with Jack and the man he is protecting, a Russian named Komarov, in one truck, followed by not so nice Russians in a second, bigger truck, and Pop trundling along behind in a newly ‘acquired’ truck of his own. It’s an effective scene that no doubt leaves hundreds of dead innocent victims in the wake, but in the end the scene – like the franchise – outstays its welcome.

Only minutes after they crawl from the crumpled wreckage both McClanes enter video game mode, killing anyone who dares pop their head up. Which is a lot of comrades.

It’s no spoiler to reveal that McClane Jr is nearly as proficient at the basic killing arts as his dad, unfortunately witty quips skipped a generation. In fact while the film tries to provide some between-action levity the more obvious joke attempts and repartee sound leaden and forced, as does the father / son angst that peppers the early stages. It’s telling that the closest thing to a family reconciliation is immediately followed by a McClane saying “Now let’s go kill some motherfuckers“. The chat at McClane family reunions should be priceless.

The body count mounts and the action moves to Chernobyl. Young Jack remains on edge, steely eyed and focused, but John has seen all this shit before – four times – and his demeanour weaves between laid back and jaded. I liked him better in the early days when he was always running on a mix of desperation and confusion. I liked the franchise better when it didn’t reek of desperation and confusion.

While this film has the standard ‘too many explosions and deaths’ required by these films, it has nothing that will make you forget John McClane’s exploits at Nakatomi, or years later at Dulles airport, or even through the streets of New York with Sam Jackson running side saddle.

When I heard this film was moving locale to (cheap) Eastern Europe I was concerned. When I heard McClane was taking another of his kids along for the ride I was even more concerned. When I saw in the opening credits that Cole Hauser, ‘Mr C Movie’ himself, was the only recognisable non-Willis name attached to the film I was terrified. Contrary to all reports though, (unfortunate title aside) A Good Day to Die Hard is a decent action film and worthy of addition to the franchise. John McClane can still blow shit up, he just can’t blow shit up good like he once did.

Final Rating – 7 / 10. Because where else will you see a truck crash into the third floor of a building… while dangling from a helicopter… ?

The past few years has seen all of my 90s action heroes attempt to revive their careers. Arnie had The Last Stand, Sly had The Expendables and Bruce had this. For mine Bruce wins by a broken nose, though if I had total freedom of speech here I would say check out Universal Soldier 4: A Day of Reckoning (not that Van Damme really wins, he’s only a bit player in that film).