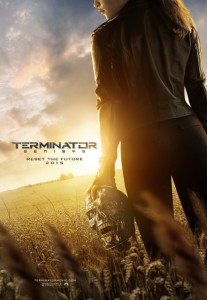 So Judgment Day happened. Or it didn’t. The rise of Skynet either went ahead as prophesied. Or something else altogether.

With the Terminator mythology already pretty much nailed in films one and two, every subsequent flick seems like the extra stroke of paint on the Mona Lisa; at best they add nothing new to what’s already there. At worst they ruin an already complete masterpiece.

The film opens with some reworked flashbacks, with new filler scenes spelling out details and plot points that we already know well, and certainly didn’t need to be bludgeoned with again.

Terminator: Genisys proposes that various Terminators and a new Kyle Reese (Jai Courtney) are again pushed through time to an alternate timeline to further muddy the waters of what is already a confusing jigsaw of originals and pasty cover versions. They meet again with Sarah Connor (Emilia Clarke), though more the hardened T2 firebrand than the 1984 innocent waitress. John Connor is also back in what I think might be the third or even fourth iteration. And as the cherry on the sundae, the film tries to fool us that JK Simmons has always been the disbelieving psychiatrist from each movie so far.

It’s like a reunion of sorts, though imagine a reunion of the family members who don’t always get on, and with some either dramatically older or younger than we recall, with the film taking place along three timelines, two well worn and familiar, and one yet to pan out.

With Sarah already being aware of the backstory and indeed her future, when Reese appears she immediately rails up at what she feels is something of a karmic arranged marriage, while 1991 era Arnold stands by like a proud, out of his era, dad.

Speaking of Arnold, yes he is here in a couple of versions – and they fight for a minute or so – but none of them make much impact, something that should shock no one already aware that the Governator is now nearing 70. When he refers to himself as “old, not obsolete” the first time, you snort. The second time it’s already a bit sad.

There is an already well worn plot device that suggests our reliance and acceptance of technology will someday assist in our demise, and the usual recurring ‘our fate is inevitable’ theme that is either prescient or ironic.

Jai Courtney is an ok action actor but is miscast as Reese, who should be the rangy soldier, but is almost as muscled as Arnie in his 90s prime. The Khaleesi fares no better, with her physique half way between the 1984 and 1991 Sarah’s, but without any of her steely focus and intensity. And Arnold, well the franchise probably wouldn’t exist without him – which is no longer a bad thing – Arnold isn’t asked to put on silly glasses or such, but his alleged decades of ‘learning’ about the ways of humanity obviously haven’t even taught him how to smile for a selfie.

The action sequences are competent but even the cgi advancements don’t elevate the material. The best moments in the film are effectively reprints of earlier films, and the new material varies between middling and questionable. Might I just say that there are new developments and changes to the folklore that future generations of this franchise will live to regret…

The first two James Cameron helmed films in the franchise are both immortals. I must admit that while I can do without the third and fourth films, I never especially hated either. This new All Star edition though? This I can do without.