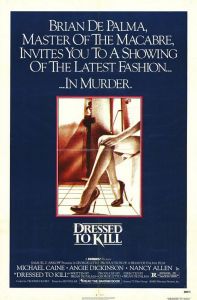 Kate Miller’s sex life is far better in her head than in her bed, though it disturbingly seems to involve rape fantasies and other delusions that don’t find a role for her husband.

Her psychiatrist Dr Elliott (Michael Caine) implores her to open up to her husband and let him know how dead he is in the sack. Maybe Doc Elliott forgets who pays his bills? Instead Kate goes to the museum to find solace in the beauty that surrounds her, and promptly engages in a torrid affair with a total stranger that leaves her instantly wracked with guilt, wondering where her underpants and wedding ring are, and – after finding a chilling piece of mail – wondering if she now is carrying a cocktail of venereal diseases.

Never mind, for when Kate emerges from the lift to take step 1 in deal with her many problems, a buxom blonde arrives to prove no matter how bad your day might seem, a straight razor to the face can always make it worse.

Of course when a pretty white rich woman is killed there are many interested parties. The cops, the psychiatrist, the hooker who witnessed the attack. All are present and filled with varying degrees of curiosity.

Only Kate’s geeky grown up Harry Potter son wants to take on the case head on, he co-opts the hooker to help with his theorising and planning, moving ever closer to the possible killer before – in true De Palma style – the killer unveils themselves, and we can put this film behind us.

Dressed to Kill sure is stylish and yes the fifteen minutes either side the initial kill is taut and suspenseful, but the subsequent build up is dry and often dull, and the conclusion is unsatisfying and frankly silly. I’m all for lauding the ‘classics’, but I find little here to talk up.