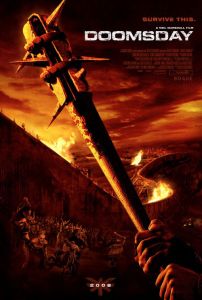 Look to be honest I watched the film, wrote it up and then someone along the line I deleted it. Now I can’t be bothered rewatching or rewriting the film…

…because the film sucks.

Just understand that Doomsday is a rip-off of Mad Max 2 and Escape from New York. And a bad one.

Don’t get sucked in by the fact the guy who made The Descent made this. That film was good. He messed up here.