Once Upon A Time In Mexico (Review) 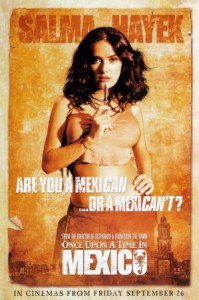 The other night I watched The Brotherhood of the Wolf for the first time in a long while, it was overlong, a little full of itself and over-reached by trying to cram too much into the film, but there were things to admire nonetheless.

Now tonight without thinking I watched the Mexican equivalent, which is all those things, except thankfully not as long.

The director Robert Rodriguez made some notably cool films, including Desperado and From Dusk till Dawn, and Planet Terror which was inadvertently dragged down by the overwhelming suckiness of the sister movie Death Proof.

With Once upon a time in Mexico I think Rodriguez wanted to make the kick-ass over the top mind blowing finale to his Antonio Banderas as an angry gun-toting Mexican trilogy, but there is so much going on in this dog’s breakfast of a film that it simply ends up overwhelming itself and losing its way.

But what the hell is all this about?

The president of Mexico is to be assassinated, because he is a good guy and that gives hard working drug barons the shits. Everyone and his dog in this movie is involved in some way, either on the trying to kill him side or the trying to find out and stop the bad guys side, many of them are working two sides or waiting to see who will win and what they can get out of the scraps.

The only one in the entire film who is pure is Antonio, Awwwwwww.

Banderas, the 40-something-woman’s heartthrob, is back as the unnamed “Desperado”, referred to in hushed tones by various characters in the film and given almost legendary status. He returns alongside his muse played by Salma Hayek, who in unthinkably bad form is only in the film for a few minutes in flashback. (I think I heard she didn’t want to even be in the film and agreed to a bit role more as a favour to the director who basically gave her a US career, but she is at the peak of her hotness here and minimizing her role is inexcusable.)

Antonio spends most of the film doing one of two things:

As we can guess Salma is no longer, she gets less than 10 minutes screen time and perhaps 5 lines of dialogue. Then again this isn’t her film nor Antonio’s either. Instead amid the hodge-podge “Who’s Who” of Latin actors on show including Eva Mendes, Ruben Blades, Danny “Machete” Trejo, Salma, Antonio and even an Iglesias, it is pasty ol’ Johnny Depp that makes OUATIM his own.

Depp plays Agent Sands of the CIA in a role even more cartoony than his Jack Sparrow in the various Pirates films. He spends half the film in various awful outfits that uncaring vacationers might wear and the whole film overacting to the point that I kept expecting him to turn and wink into the camera.

Robert Rodriguez makes a big point at the start of his films that he is responsible for almost everything that goes into it, including writing, editing and directing. OUATIM is one example that perhaps this isn’t always a great thing. There is so much going on and so many people doing the goings on that every character is under-utilised, a more judicious script supervisor and some simple editing might have saved this film from at times disappearing up it’s own arse.

In saying that there are some truly cool scenes and some “mad stupid” stuntaleros, there are also some quotable quotes “Are you a Mexi-CAN, or a Mexi-CAN’T?”, but too often the truly cool is diluted by the omni-presence of the uncool and try hard.

(Oh and Mickey Rourke is in it carrying a Chihuahua around, don’t know why that is important but I felt like I was missing something by omitting this fact.)

Final Rating – 6.5 / 10. Desperado was OTT excellence, From Dusk Till Dawn was genre hopping excellence. With OUATIM Rodriguez finally over-reaches, and the end result is an uneven and frustrating film.