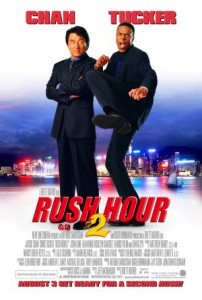 The first Rush Hour was a little unexpected, a US made film that allowed Jackie to be Jackie without too much compromise, had a lot of action scenes that weren’t too watered down and a heap of light comedy that was never hilarious but always amusing.

What is even more unexpected is the fact that the sequel was almost as good, plus it dials up the hottie factor that was missing in the original.

Taking place immediately after the original Rush Hour concludes,  Lee and Carter are in Hong Kong enjoying a break, although Lee keeps infuriating Carter by accepting cases along the way.

One such case involves a name familiar to Lee, that of a Chinese Triad bad guy who was involved with his Father’s death. Lee and Carter immediately set about tracking him down and it leads to a multi-national money laundering operation.

The second half of the film sees the duo back on LA on the case, leading to cameos by Jeremy Piven and Don Cheadle that actually add to the film and aren’t just there for name recognition value. The action hurtles along, the jokes almost always hit the mark and Jackie somehow snags the hottie at the end!

Speaking of hotties, along with Zhang Zhi and Roselyn Sanchez there are several other hot chickies in this film. In fact it features the closest things to T&A that have or will ever appear in a Jackie Chan film.

One last thing: The original Rush Hour constantly made light of the cultural differences between Asia and the US. The sequel ramps up the level of sarcasm and at times straight out racist jokes, but again it is deemed to be OK as long as the guy cracking the joke is smiling.

And as long as he isn’t white. There, I said it.

If a white guy, say Vince Vaughn was cracking these jokes (“I’ll bitch slap you back to Africa” etc…) he’d be slaughtered. I didn’t actually find much of what was said offensive, just pointing out that the PC police aren’t as colour blind as they think they are when they omit racism by other races, even in joke-form.

Good movie action, a little under his best though.

Not really, but there is some undeniably athletic stuff for a 50ish guy.

Crowd pleasing again. (And pimpish, he scores with Roselyn Sanchez!)

Not really but they spent some scratch putting this together, and Jackie looks bad ass in a black suit.

Yeah but for the language barrier jokes and slips only.

He’s 95% there at this stage, only the high-risk stuff is missing.

No. But there are sequences that scream Jackie Chan.

Final Rating – 7.5 / 10. As disposable and unnecessary as the first. Also almost as funny and enjoyable as it is lightweight. I thought they’d never run out of Rush Hour movies, then they made No. 3…