From Dusk Till Dawn (Review) 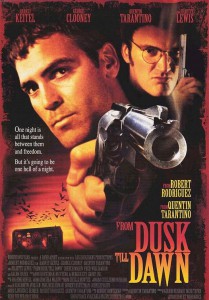 Tarantino on the wrong side of the poster.

A couple of weeks ago watching the similarly bi-polar (but in a different way) The Box inspired me to revisit this shitbird-crazy piece of work (and I define shitbird crazy as a good thing!).

Written by Tarantino back in his video shop employee days, and directed by Robert Rodriguez fresh off his Desperado breakout, From Dusk Till Dawn is really two episodes combined to make a fun, funny and original, yet totally off-the-wall film.

It also had an in-her-prime Salma Hayek dancing in a bikini with an albino snake wrapped around her neck. Never a bad thing.

The opening scene has Earl and Pete yakking up a storm in the local bottle-O. Among other things they discuss a local string of crimes perpetrated by two low life brothers named Seth and Richie Gecko, that include robbery, murder and kidnapping. It seems they are headed for the border which will mean they go right through the local area. Earl hopes that will be the case, he is the local sheriff after all.

A quick reveal shows that Seth and Richie are indeed nearby, and after an action packed and frankly hilarious shootout they leave the smouldering remains of the bottle-O and hit the road.

They are indeed on the way to Mexico, to be more specific a backwater town named El-Ray, where they will be meeting their fence, (the guy who will buy the stolen goods), but first they must cross the border, where they are Public Enemy No. 1 & 2.

Enter Jacob, Kate and Scott, a family on holiday in their campervan. Jacob has lost his wife in a car-wreck, which made him question his faith to the point that he has given up his role as a Priest, Kate and Scott are his children, the fact that Scott is of Chinese descent is acknowledged but never explained.

Seth and Richie abduct the entire family and demand that they escort them across the border to safety, now even though Jacob has a troubled past he is still humble, yet steely determined, and he initially says “no chance”. That is until Seth threatens to sic Richie onto Kate.

Now to expedite proceedings after some shennanigans they find themselves across the border and in Mexico, where Seth directs them to a local bar called the Titty-Twister for celebratory beers.

Now up to this point the happenings in this film were only improbable. Here it gets a little bit crazier.

At the totally-O.T.T. Titty Twister the Tarantino part of the film ends, the rest being all Rodriguez. The bar is populated by heaps of familiar character actors and film personalities, a short list includes Cheech Marin, Tom Savini, Greg Nicotero, Danny Trejo and Fred Williamson, Salma arrives later. The bar has strippers and crazy dancers, an inhouse band, surly staff and dangerous looking clientele.

Salma plays Satanico Pandemonium, the exotically named, exotic looking, exotic dancer, complete with the previously mentioned albino reptile. Over the next three or so minutes she puts on a dance that has the bar transfixed, and I dare say many bars in the audience were transfixed from this point too.

Now up to this point the happenings in the film were only wildly improbable. Here it goes cuckoo-fucking-bananas!

Salma, (the one we know and love) moves on, and all shit breaks loose.

The remainder of the film has scant plot aside from the fact that our characters are beset by honest to goodness vampires from this point on until the credits. There are numerous sightgags, some effects work that is equal parts dodgy and inspired, and gore galore, but all of it more cheesy than cringe-inducing.

Most “standard” vampire rules apply, stakes, holy water, crosses etc… and the small group of surviving non-bloodsuckers must make it to dawn to see if the final rule, that of death by sunlight, applies.

There is some great dialogue, frenetic action and inspired chaos, there are also some quite hilarious intermissions, most notably Fred Williamson’s ‘Nam recollections that seem to ramble on and on, all the while becoming more animated.

While this isn’t as critically embraced as Pulp Fiction or even Sin City, and with reason, From Dusk Till Dawn is amazingly efficient genre-busting filmmaking. I’ve said before you can’t watch the same film over and over again without getting bored, you need some variety, something different sometimes.

The fact is that From Dusk Till Dawn is likely totally different from almost anything you’ll watch this year. But it is also a great film, and hugely entertaining.

Final Rating – 8 / 10. I hate the description Horror-Comedy, but this film and Shaun of the Dead prove that it can be done well.