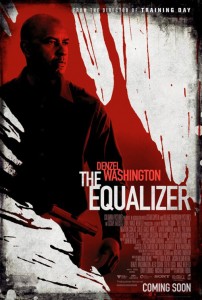 Bob (Denzel Washington) has a menial repetitive job with low pay. He bothers no-one and keeps to himself. Sure he chats and is amiable, but in an instantly forgettable way. He’s the quiet guy in the diner eating his usual order before paying and leaving without anyone noticing. Basically it doesn’t matter if Bob is there or he isn’t. Aside from the beefy guy who lacks confidence but wants to be a security guard, Bob makes no difference to anyone’s life.

Bob is like lettuce. This is how Bob likes it. Bob has chosen life as human lettuce.

Bob is slave to a series of complusions due to having Obsessive Compulsive Disorder (OCD). This condition impels Bob to order items in a certain way and complete tasks the same way each time. Frankly while this is a recurring motif in the film it doesn’t mean much or lead the plot anywhere. It is just there to be there.

OCD is the plot’s lettuce, always there, never necessary…

Bob the notoriously exact, notoriously private, notoriously invisible dining patron, strikes up a stilted platonic relationship with a too-young hooker Elina (Chloe Grace Moretz). She is personable and friendly and obviously doesn’t conform to the ‘hooker’ archetype, she is also on call for abuse at the hands of a violent Russian mobster.

While it is never spoken of, Bob sees this. He sees it unfold through the diner window. Elina sees Bob seeing this. She never speaks of it, she just watches Bob realign the salt shakers and ball his fists silently. They don’t need to talk about this directly – because how could befriending a virginal hooker under the influence of someone predisposed to violence ever turn out bad?

Because feelings and emotions and talking and stuff are also this film’s lettuce. As is describing what happens next.

Bob has a particular set of skills. It seems that in the modern age if you want vengeance done right, head straight to the oldest slightly introverted guy you can find, preferable someone 60 plus; Denzel, Liam Neeson, Bruce Willis (still) and the Expendables… OK age is obviously no guarantee.

And Keanu is hoping John Wick is sufficient to grant him his Senior Citizen Brutality licence.

The Equaliser exists to launch a potential franchise, and to be honest it does enough to warrant at least a second edition. But churning stuff like this is relatively inexpensive and easy. Give the right guy the right reason, make the bad guys bad, and let nature take its course. And film it in lurid colour.

Perhaps the best thing the film does is provide an obviously evil bad guy, backed with dozens of disposable henchmen. The lead Russian bad guy looks like Kevin Spacey but has the drive and compassion of a T-1000. The sparring scenes between he and Denzel are some of the non-violent highlights of the film.

The Equaliser is ruthlessly efficient and bone dry. It amasses the ingredients and diligently lines them up OCD style. It shelves all not required, because they are not required. The Equaliser is cinematic lettuce. It has almost zero nutritional value. It is neither good nor bad for you. But it’s here, and because it is you might as well try it.

Final Rating – 7.5 / 10. Denzel is now in the avenging business – and on opening day at least, business seems good.

While I try to throw a joke or two into proceedings when I can all of the opinions presented in my reviews are genuine. I don't expect that all will agree with my thoughts at all times nor would it be any fun if you did, so don't be shy in telling me where you think I went wrong... and hopefully if you think I got it right for once. Don't be shy, half the fun is in the conversation after the movie.
View all posts by OGR →
This entry was posted in Denzel, Film, Movie Reviews, Superstars, Worthwhile Movies. Bookmark the permalink.