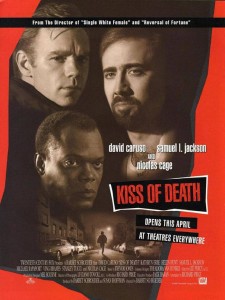 It’s strangely ironic that Nicolas Cage starred in a film called Kiss of Death, seeing as that is what he is now commonly seen as when attached to a new film.

But Kiss of Death really isn’t a Nicolas Cage headlining film, instead a David Caruso one. There’s another reason this film sunk without a trace.

Caruso plays Jimmy, an ex-criminal with a young family driving him to stick to the straight and narrow, but apparently with the willpower of a salivating Doberman standing over a t-bone steak. On his first night being responsible for his newborn baby, one visit from sleazy Ronnie (Michael Rappaport) and his clumsy guilt trip mind games are sufficient to have Jimmy perform a capital crime that very night.

Of course the combination of quick money and misguided loyalty ends up with Jimmy behind bars, where the persistent interrogation and threats from Calvin (Samuel L Jackson), the cop who nabbed Jimmy on the fateful night, leads to Jimmy deciding that he is once again loyal to the family above all else. A bit late seeing as the wife has seen an untimely end in a car accident with all the calling cards of being decidedly suspicious.

Jimmy sells his ‘once mates’ out to gain release, and agrees to be a stoolie to get the others, with justice now being the forefront of his decisions and Calvin the only man in full knowledge of the reality.

It proves so simple you wonder what the cops did for the previous year. Before taking the first breath of fresh non-prison air, Jimmy has learned where he should be visiting to get to the facts.

Enter Little Junior Brown (Cage), a roid-infused meathead asthmatic with a predilection for benchpressing strippers and straight knocking mofos out. This is hardly the first ‘Nic Cage overacts to shit’ flick but it sure is a good example of one. Unfortunately while he is acting like an insane person the film takes the tone of David Caruso, in that it is overly serious, dour and entirely unremarkable.

While it isn’t ‘all time awful’, that proves cold comfort, like paying a dollar to get punched in the face just because the price used to be two dollars. Would you prefer ‘slightly less awful’ or the bliss of it ever existing?

Final Rating – 5.5 / 10. There was a time when Nicolas Cage was ‘so hot right now’. Kiss of Death finds him at his most lukewarm, and the waxen face of David Caruso already in sleepwalking form.

While I try to throw a joke or two into proceedings when I can all of the opinions presented in my reviews are genuine. I don't expect that all will agree with my thoughts at all times nor would it be any fun if you did, so don't be shy in telling me where you think I went wrong... and hopefully if you think I got it right for once. Don't be shy, half the fun is in the conversation after the movie.
View all posts by OGR →
This entry was posted in Crappy Movies, Film, Movie Reviews, Nic / Nicolas Cage, Sam M-F Jackson, Superstars. Bookmark the permalink.