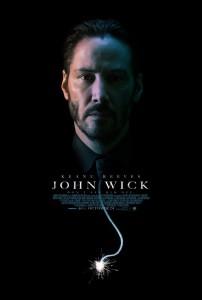 This is either the poster or a shampoo ad.

This is John Wick when not angry; with his loving wife taken by an insidious disease, and his career of great violence ceased by personal choice, John Wick is a man without a purpose. He shuffles his beautiful house, pausing to sit in dimly lit corners and mourn. His only outlet is the occasional burnout session in his classic muscle car.

You wouldn’t think much of John Wick when he is not angry.

This is John Wick happy; happiness arrives in the form of a cute puppy, a gift ordered by his wife prior to her death. The only link between he and his beloved. Wick loves the dog for what it represents, then for what it is, because who wouldn’t love an energetic cute puppy?

It’s hard to tell if you would like John Wick when he’s happy, because it sure doesn’t last long.

The omnipresent Eastern European gangsters – who seem to exist just to piss off old guys like Liam Neeson, Denzel, Bruce and now Keanu – steal his car and beat him so bad that the Wick barely flickers. They also kill his dog… Now John Wick has no wife, no car and no dog. But it would seem he has his old job back. And he sure has a purpose.

This is John Wick angry; he kicks, stabs, shoots, screams threats even while tied to a chair, walks into a crowded nightclub and leaves dozens of heavily armed gangsters pulseless. Wick is determined, fearless and driven.

If you like Taken, Dredd or The Equaliser, you will no doubt prefer John Wick when he is angry.

It’s good to be able to root for Keanu Reeves. For too long he has been the victim of bad films. It’s hard to like anyone when you are busy loathing the film that they are in for wasting your time. At a lean 90 odd minutes John Wick wastes no time, and in the nightclub sequence it boasts one of the better shootouts in action films in years. The body count in this scene alone tops 30 or 40, most at close range and all in a confined space filled with punters. It is a visceral and exciting few minutes, with amazingly zero police sirens or civilian deaths.

John Wick just seems more fulfilled when he is filling bad guys full of holes. The key to future sequels – and I for one look forward to them – is coming up with new ways to poke the bear.

Final Rating – 7.5 / 10. 30 minutes leaner and 30 kills heavier than The Equaliser. If cold vengeance is your thing, you’re a bit spoiled for choice at present.