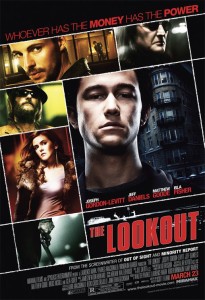 One stupid moment of teenage bravado ends in tragedy, including permanent intellectual debilitation for Chris (Joseph Gordon Levitt), most often exhibited in the inability to retain memories.

Making and following lists is a big part of the everyday routine.

Now several years after that one regrettable moment changed the course of several young lives instantaneously, Chris attempts to live a normal life, free from the pity and sympathetic glances of his fellow small town residents, some of who revelled in his pre-incident sporting career that many felt would take him far away from the restrictions of small town life.

Chris lives with Louis (Jeff Bridges), a blind man who similarly seeks to forge his own way, only with far more confidence and larger ambitions (Louis wants to open and run a restaurant). Chris is the cleaner at the local bank.

When Gary talks to Chris in the bar he talks to him not as a sympathiser or well-wisher, but a regular guy who knows his past and is genuinely interested in Chris the person. He asks about the past without wonder. He talks about the extent of Chris’ mental limitations without tip-toing or hiding behind other topics. He introduces Chris to Luvlee (Isla Fisher) not as a gesture of pity, but as if he is trying to help a mate out…

Chris obviously appreciates the treatment. He definitely appreciates Luvlee. He starts hanging out with Greg and Luvlee and their many friends. Even with many present Greg remains the centre of attention. He is charismatic and charming, with a confidence and intensity that ensures all eyes are on him and every ear is listening for his instructions.

So when Greg tells Chris what he has planned and where he sees Chris helping, Chris listens, even though it seems beyond his capabilities and outside his standard daily duties.

The Lookout is well directed, well acted and compellingly paced. It has a large cast full of excellent actors, none of whom try to steal the film or show off.

The Lookout has similarities to Shotgun Stories and last year’s Blue Ruin, films where everyday people find themselves in slightly atypical situations. It is the reality of the reaction that both grounds the movie and generates the drama. And the lack of explosions and computer generated robots that deny the film an audience.

It is slightly depressing that this film fell off the edge of the Earth while 137 other less worthy films found fame and fortune. Perhaps those of us lucky enough to find these diamonds in the rough can covet the knowledge that we can keep these films to ourselves, while Joe Public wonders if Sin City 2 really is the best film he’s ever seen – or if it is still Terminator: Salvation…

Final Rating – 7.5 / 10. Another under-rated, under-seen gem. Well worth tracking down.