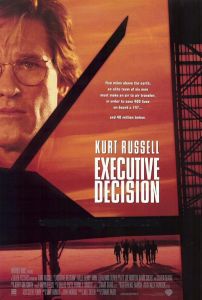 Kurt Russell growing out of a plane…

As hard as it is to believe, there was a time when killing off Steven Seagal a mere half way through a movie was a big deal. Nonetheless it happened here, and is probably the only thing keeping this Con Air / Under Siege clone from total obscurity.

When terrorists hijack a passenger plane full of civilians with the intent of exploding it in a well populated place to bring attention to their cause du jour, the US government are left with a sticky predicament; let the terrorists land either wheels or nose first, or do they shoot the aircraft down, sacrificing the 500 odd passengers for the greater good?

Of course with movies it’s never just Plan A or B, not when Lt Travis (Steven Seagal) is the leader of the Special Forces ‘unpleasant jobs’ squad. With an arch of the eyebrow and a swish of the ponytail he convinces the high ups that a small team can sneak aboard the plane using a Stealth bomber, and take the bad guys out without any casualties.

Dr Grant (Kurt Russell) is the only non-soldier aboard, tasked with providing ‘on-field’ intelligence and information about the tendencies of these particular terrorists – seemingly unnecessary as Seagal almost always just flails about and snaps limbs regardless of the actions of his assailants – and Halle Berry plays Jean, a flight attendant and the only person aboard aware of the crew’s presence.

Russell does his best impromptu McClane, John Leguizamo yammers away as the energetic Rat, a Special Ops member with a joke for every occasion – few of them good, and a forgettable group sit around the big table at HQ, periodically talking into the big speaker and trying to look suitably concerned.

Executive Decision isn’t terrible, but if you think Under Siege on Con Air you’re about spot on, only without the action of the former and the ridiculous dialogue and improbable events of the latter. It has been a mere few days since I watched the film, and I can’t think of a single aspect of note that might convince me to watch it again in the future.

Final Rating – 6 / 10. My Executive Decision would be to pass this film by and preserve your two hours to use on something more rewarding.