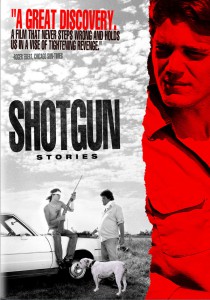 Shotgun Stories tells the simplest of simple tales, dealing with the progression of an extended family feud – and with a title like that you know it won’t be resolved with a game of rock-paper-scissors.

If an “Urban” setting is nowadays code inferring “a ghetto” or “poor black” setting, then Shotgun Stories is set in a “Rural” environment in Arkansas, by which I mean “redneck” or “poor white”. In fact I don’t recall seeing a single non-white person in the film, even in the background – aside from the basketball scenes – is that racist? In any case it’s true.

By “Poor” I mean that asking to borrow a guy’s VCR comes with a cost – of a bag of Doritos.

I mean that a guy lives in a tent in the yard of his brother.

I mean the other brother lives in a van on the riverfront and spends half the film trying to fix his tapedeck.

When a local man dies it obviously impacts the community, especially the man’s family – only in this case the deceased had two families both with the name Hayes. It is explained that in his early years the man all refer to as “Pa” ran out on his wife and three young kids, all of whom he treated awfully.

The man then found religion and remarried raising four new children in a loving family. (For fairly obvious reasons) the ex raised the three boys to despise their old man and his new family, then as soon as they were old enough she left them to fend for themselves.

The jilted lads, all now in their 20s, are named Son, Boy and Kid – seriously, and the film follows proceedings almost exclusively from their point of view.

Son is the senior and most successful of the trio, he has his own home and family, though his wife has left taking their son due to Son’s gambling issues (but he has a system lady!). Son works at the local fish farm.

Boy has no job to speak of, he is the one in the van on the riverfront, and he voluntarily coaches some local boys on a basketball team.

Kid lives in a tent in Son’s yard, where he is content, he also lives on the fish farm and is romancing a young woman, though he is concerned that his current residence, income and future prospects don’t bode well for a successful marriage. He also has a prize mullet.

Things come to a head when the three boys crash the funeral that they weren’t invited to. Some bitter but carefully chosen words are said and a fracas is narrowly avoided – but not forgotten.

The other four more favoured kids, again in their 20s and late teens, feel disrespected and take it upon themselves to “set thangs raaaiiight”.

Over the next few days warnings are issued, scuffles are started and extinguished, and tensions simmer… then a dog dies.

A depressing conclusion was almost inevitable from the early goings of this film, and indeed there is much violence, though not much occurs onscreen and surprisingly little of it is related to firearms.

It isn’t the violence that makes Shotgun Stories so good though, it is the adherence to tone and the performances from all featured actors, Boy is obviously the most reticent about becoming embroiled in proceedings and is in fact a fairly timid man, Kid is a little hotheaded but genuinely concerned for the future.

Above it all is Son. With the grim set jaw Buzz Lightyear and almost a Sling Blade mutter, Son walks like an old man and has a furrowed brow reminiscent of Sam Eagle. None of these ingredients seem to suggest “cool” but somehow he manages to exude confidence and capability. Son doesn’t talk a lot and when he does he is all business and people – especially his brothers – listen.

It is quite fitting that Shotgun Stories has less a finale than a finishing, as events more peter out than rise and build towards a climax. Regardless of the lack of flash or big explosions though this is an excellent character study and a compelling story, and is worthy of greater attention and recognition.

Final Rating – 8 / 10. An excellent “little” film. Never have a few days in the life of an extended redneck family seemed more compelling.