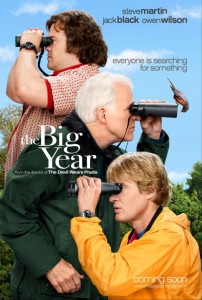 Kenny (Owen Wilson) is a busy tradesman and building contractor working hard to make his second or third marriage work. He likes birds.

All three men above are ‘birders’. They go ‘birding’. ‘Birding’ is the act of venturing outdoors to look at and identify different types of birds. I’m sure you could do it indoors but you would undoubtedly be far less successful.

i don’t know if birding is a sport – the ladies and gents pursuing it in this film do so with great passion and commitment, and they most certainly compete against one another – but it is another great example of taking a potentially dull topic and making it entertaining.

The best and most successful birders must be willing to travel – a lot – they must change plans at the drop of a hat, brave inclement weather, skip family events and work obligations. They must also be able to identify and log the birds themselves, but that seems to be one of the lesser issues.

those who want a bigger challenge will commit to a Big Year, essentially a calendar year where they endeavour to tick off as many different birds as possible in the Continental United States. With determination, skill, commitment and a little luck, Kenny is the current record holder, both Brad and Stu are embarking on their own Big Years, they just aren’t telling anyone else for fear of sparking the competition.

The winner of the Big Year gets no reward beyond being identified and named as the best. The running totals are maintained by the individuals themselves and operate on the honour system. If you say you saw a bird – or even heard it – then it goes on your tally.

The beauty of the Big Year as a film is that it takes a likeable enough pursuit and converts it into a very likeable film, filled with interesting characters. There are no unlikely, or at least no implausible, developments, no reality show shenanigans, none of the usual one upmanship that these films often rely on, and most importantly no mean spirited crap.

As unlikely as it sounds, Steve Martin, Jack Black and Owen Wilson play their characters, all of whom are uniquely compelling in their own way, as low key as you could imagine given the circumstances. There is mischief, rivalry and ribbing, but no nastiness or underhandedness.

this is certainly not the film that would result if Sandler, Ferrell and Napoleon Dynamite were cast.

The Big Year is not nutty, kooky or zany. It is not laugh out loud riotous or jaw droppingly original even. It is light entertainment featuring strong performances from good actors playing somewhat against type. It takes a niche ‘sport’ and drags you in to a world as diverse and rich as you could imagine.

It made me want to look into birding as a hobby. Of course I didn’t and I won’t; but I now have far more appreciation for those with the strength of conviction to pursue their dream, no matter how strange and even pointless it seems to everyone else.

Final Rating – 7.5 / 10. I have now watched The Big Year three times, and I have no intention of resting on my current tally.