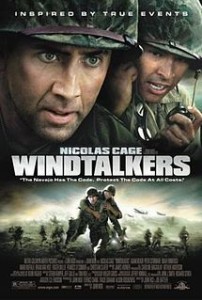 Windtalkers, like Saving Private Ryan, like Blood Diamond, like *gulp* Pearl Harbour, tells a simple story with an important message against the backdrop of conflict. The message of this story, ‘human beings are all equal’, is an important one, you could argue even more important than Pearl Harbour’s message that ‘acne is bad’.

It’s just that when the key moments come across as contrived and calculated as a Ke$ha song or a politician’s apology, the impact can’t help but be diminished.

Also, I consider this Day 1 of the ‘Nic Cage stopped reading his scripts’ era.

Cage plays Joe, a heroic and determined soldier in World War 2 released from duty on medical discharge due to an injury that impairs both balance and hearing. With the army refusing to take him back on regular terms, Joe looks for any opportunity to again return to the front line and defend his country.

This opportunity arises from a strange source. The US forces had huge security issues when the Japanese forces intercepted and eavesdropped on radio messages and signals. Once the codes were broken, the impact was immediate, with the enemy gaining an instant tactical advantage.

To remedy this the US army brought in Navajo native American Indians. Their ancient language was so unique and mysterious that they could relay messages to each other in their native tongue with no danger of the enemy understanding and reacting.

The problem with this is twofold, 1/ there needs to be enough Navajo available to send and receive the messages and pass them on to the relevant people and 2/ should one Navajo fall into enemy hands, the danger of him cracking under torture and handing over the entire code was very real.

Joe would serve as a guard of sorts for one of these Navajo radio operators. His overriding directive though is to protect the integrity of the code, not so much the individual ‘carrying’ it.

Unfortunately that individual is of course first and foremost a man being in the form of Private Ben Yahzee (Adam Beach), a jovial and likeable sort. In the initial stages Joe deliberately distances himself from Ben so as not to let feelings subvert his orders at the key moment. Other American soldiers are not so accepting, lumping the new Navajo soldiers in with the enemy forces despite their bravery and the fact that they might hold the key to the entire mission’s success.

For his part Ben swiftly realises that war is heck, and that’s just the way Joe likes it.

The convoluted setup above necessitates the film’s two plus hour running time. The fact John Woo is in the director’s chair means that we will see a high body count, and also that we will be bludgeoned over the head with morals and human angles.

And how (no pun intended). Joe takes out more guys than Commando and Godzilla combined as explosions and bullets go off all around him. The only breaks in action come with the small moments between battle, where hard nosed Joe comes to realise that maybe Ben is more than just a guy who looks a little different and sometimes talks funny, but *sob* a living breathing person! (Of course this realisation is tempered when you think that Joe then goes back to killing hundreds of human beings just because they talk funny and look different…)

The themes are big. The action equally so. The problem is that the big explosions are more efficient and even handed than the scenes that aim to deliver the message. Consider the action scenes as a sniper, and the ‘sensitive’ scenes as an atom bomb and you get the picture.

Windtalkers is hardly the worst film ever made, but when John Woo can’t pick a side the results are always confusing. When he goes all out like Hardboiled and The Killer though, it’s awesome.