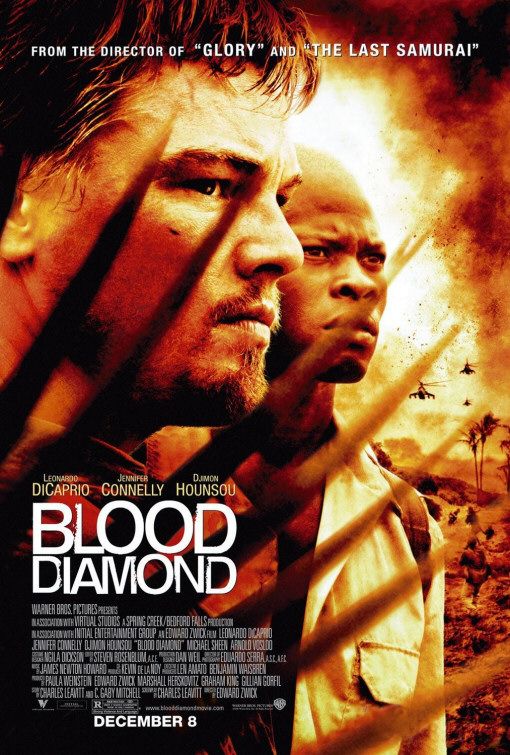 Blood Diamond is a tale of juxtaposition: a naturally beautiful environment beset with unnecessary death and inhumane brutality and well engineered action and battle sequences with all of the adrenalin but none of the usual viewing satisfaction due to the reality of the subject matter.

Blood Diamond tells an intense personal story within the framework of a much larger, much more disturbing background of a turbulent time in world history. And it tells both extremely well.

The bigger picture shows tiny African nation Sierra Leone at the turn of last century, a land that has lost its way amid corruption and genocide, where armed forces and RUF rebels battle for supremacy with the innocents in the middle quite often the expendable pawns in an often savage and frankly depressing arm wrestle. Early scenes show indiscriminate slaughter of entire villages by rebels, with entire families simply and casually erased, and the boys taken and ‘conscripted’, and others too old to brainwash enslaved to work on the diamond fields under intense armed scrutiny.

Aaaaahhh the diamonds. Civil wars need funding, and as Sierra Leone at the time was a poor nation with millions living in squalid conditions the illicit diamond trade channelled countless millions into the war effort, directly financing the atrocities carried out.

Which brings us to the ‘small story’ within the film. Solomon Vandy (Djimon Honsou), a simple fisherman separated from his family, finding himself enslaved on the diamond fields. Solomon finds a much sought after pink diamond of undoubted quality and incredible value. Rather than hand it over he decides this could mean freedom and escape for him and his family; only his theft doesn’t go unnoticed and he is only saved from certain death when the field is attacked by government troops and he and his captors are imprisoned.

It is in prison that Danny Archer (Leonardo Di Caprio) hears first hand of the pink diamond and his ears prick up immediately. An ex-soldier, now an opportunistic middle man able to work all sides for his own benefit, Danny cares not for black or white; rebel or government, he is in it for himself.

He sees Solomon as his sparkly ticket out of Africa.

Danny eventually convinces Solomon that with his contacts and knowledge he can facilitate his escape to freedom and more importantly reunite him and his family. If he can get his hands on the diamond that is.

Things heat up further when the rebels invade the capital city and the new mismatched duo are forced to flee for their lives deeper into the lawless lands of the remote villages and surrounding areas. Here contacts and knowledge are less important, so ultimately Danny enlists the help of an American journalist Maddy Bowen (Jennifer Connelly) to use her press credentials to gain access to areas out of bounds to mere civilians.

Maddy initially uses her contacts to help Solomon track down his family, and as if the ordeal wasn’t already depressing enough during the brief reunion he learns that his only son Dia has been taken and forcefully conscripted into the RUF, where he is now part of the threat against the innocent.

(Without going too much further the scenes where the boys are taken, beaten, bullied and brainwashed are both deeply disturbing and sadly realistic. They pale into insignificance when compared to the scenes only days later when those same children casually cut a swathe through waves of fleeing innocent villagers with automatic weapons, laughing and shrieking as they advance.)

The remainder of the tale follows the trio as they move towards their own goals: for Solomon it is his family and freedom, Maddy wants the big story, and for Danny it is the diamond. With a story spanning many countries taking place amid the chaos and maelstrom of a vast civil war, there are many coincidences that take place – all necessary to the story I might add – that find the key characters running into each other at suitably dramatic points of time.

Di Caprio is brilliant, shedding his pretty boy image once and for all as the hard as nails, selfish and opportunistic Danny Archer, Djimon Honsou great as the equally desperate Solomon Vandy, his hoarse scream has quite an impact, and Jennifer Connelly hard nosed and resourceful as a journo who could walk away at any time but chooses to allow herself to become involved in proceedings (she is also still insanely hot).

As mentioned above the action sequences are especially effective and gruesomely realistic, with the wholesale slaughter of anyone in the vicinity being graphically depicted. In fact the attention to detail in what is a vast story is astonishing, every depressing aspect incredibly realistic. There are no short cuts taken in this film.

Add Blood Diamond to Hotel Rwanda, Tsotsi and The Constant Gardener, excellent films that are incredibly hard to watch.

Final Rating – 9 / 10. An excellent film. A depressing portrait of an unfortunate time and place. It is at times hard to watch, which is exactly why you should see it.