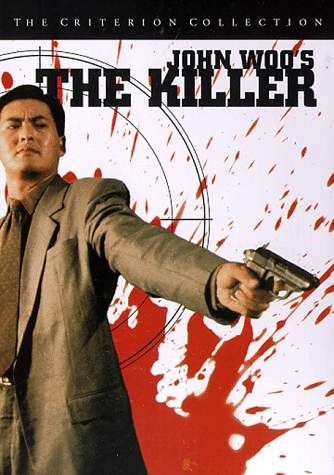 It just so happens that his primary skill is choreographing hugely elaborate gunfights with insanely high bodycounts and much bloodletting.

Such is the case with The Killer, the film opens with peaceful music, an opulent candelit backdrop – replete with the requisite white doves – and a handsome guy giving a friendly smile at the nice lady in the club who is singing beautifully for the appreciative patrons.

Then with a start action-Woo takes over, perhaps realising that a mortgage payment is due and that doves, smiles and pan-pipes don’t pay the bills. The smiling guy is Jeff (Chow Yun Fat), a contract assassin in the club on business. He sets about his tasks and 73 spurting squib-assisted deaths later he can knock off for the day…

Unfortunately in the hail of bullets and cacophony of death cries and splintering shrapnel Jeff managed to inadvertently blind the nice singing lady named Jenny with the powder blast from one of his many death dealing shots. Being the nice guy that he is he takes pity on Jenny and in the weeks that follow her release from hospital spends much time helping her readjust to her new sightless existence, and of course the two gradually fall in love – with Jenny never realising that her beau is in fact the very man who rendered her likely to fall over her own furniture…

As with every John Woo film the hero needs a counterpart, because without one there can be no Mexican standoff later in the film – and yes this film has more than one – the foil to Chow’s killer is Inspector Lee, though they end up calling each other Mickey Mouse and Dumbo in much of the lamentable dialogue that permeates the ‘waiting time’ between shoot outs.

Jeff and Lee see similarities in each other despite standing on opposite sides of the law, another staple of Woo films, the bad guys aren’t really that bad and the cops always seem to readily sympathise and even befriend them. But that said both men shoot often, shoot straight, and things (and people) tend to explode and be propelled upwards when they shoot them.

And they each have numerous chances to shoot at things in glorious intricately designed lengthy sequences of carnage and explosions. (I had a joke about China needing a one-child policy because Chow Yun Fat killed all of the males in John Woo films, but even I dubbed it borderline racist.)

I can’t say that Jeff takes out hundreds of armed assailants single-handedly in this film, because even though he does take out that many he often utilises both hands, each gripping the pistol tightly as he flies all over the place taking out thugs and punks.

The plot is merely a frame to hang some of the best shootouts in cinema history on, and the undeniable truth is that some of the non-shooty scenes are frankly pretty amateurish. But this is an action film, and when scrutinised as an action film is stands head and shoulders above many modern day pretenders. Jeff and Lee ultimately end up in a breathtaking showdown vs a never-ending horde of blindly (no pun intended) charging assailants who storm their church hideout about 6 at a time Left 4 Dead style. As they repel these invaders in stylish fashion they share an ongoing dialogue about how much they mean to each other and such, pausing only to grit their teeth and pick off still more would-be assassins.

Even in near death situations John Woo still wants people to share their feelings.

There is an ongoing argument over whether this and its companion piece Hard Boiled are truly classics or simply well choreographed bullet-operas. I’ll just say that where action is concerned no-one stages a bloody shootout as well as Woo. I’d much rather watch this or Hard Boiled than any of the last 17 generic action flicks churned out by Hollywood.

If I had to choose, I would rate the hospital shootout in Hard Boiled as better than anything in The Killer, but the church finale here does take a lot of beating also.

Ultimately though you can’t really go wrong with either.

Final Rating – 8.5 / 10. John Woo films are like the contestants for Miss Universe pageants – breathtaking to look at, but it’s always slightly disappointing when they talk…