A Low Down Dirty Shame (Review) 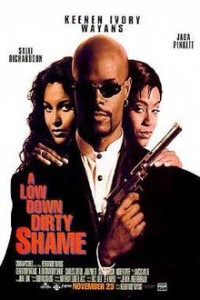 To paraphrase a famous saying; it is strange that a million Wayans’ and their million typewriters never managed to create a work of art. After The Last Boy Scout – which was more a Shane Black, Tony Scott, Bruce Willis collaboration – the nearest any random Wayans has come up with is Mo’ Money, which was more likeable than good.

In this edition Miscellaneous Wayans (I think Keenan?) is Shame, a name so chosen because it fits the title.

After being summarily dumped from the police force – the film opens with him burning newspaper clippings detailing his misdeeds. Which means he first cut them out and collected them… – Shame opens a private detective agency complete with a sassy diminutive assistant Peaches (Jada Pinkett Smith getting all ghetto and thangs).

While Peaches has the attitude, Shame has the look, the moves, the quips and the taste for danger.

Shame’s peaceful little ‘nearly getting shot every day for little money’ existence changes when he is asked to track down a mysterious and beautiful woman. A woman with whom Shame shares a past. A woman who may hold the key to tracking down the fiendish crime lord MENDOZA!

Shame doesn’t like MENDOZA! Shame, like the police force and most of society, thinks MENDOZA! is already dead. He isn’t.

So Shame and Peaches set to finding the hottie to get to MENDOZA! and justify your rental fee. Quipping and sassing all the way.

I like Miscellaneous Wayans. Actually the Wayans seem an agreeable race of people, though Marlon tries way too hard. The jokes are funny and forgettable, as is most of the action. A Low Down Dirty Shame justifies a rental and 90 minutes of your weekend, but nothing more.

Final Rating – 6.5 / 10. Like the Wayans clan themselves, A Low Down Dirty Shame is pleasant, tries hard and is pretty much indistinguishable from all the others.