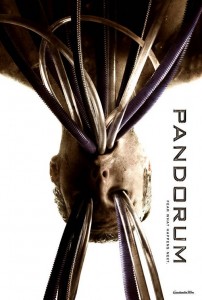 Pandorum means Space-Crazy. Dunno where they get that idea?

Welcome one and all to Event Horizon 2: Pandorum.

OK, so it isn’t really, but it does have the director of EH on board and read this synopsis.

“Pandorum revolves around some spaceship crew who awake from hypersleep to find they have no recollection of earlier events or what bought them to this point, and in their investigations they uncover far more menacing things on the ship than they ever might have imagined.”

Remind you of anything? Thought so.

The first guy who wakes up is Bower, played by Ben Foster, who I have seen in other films and who possessed the same awkward ugliness/attractiveness that Owen Wilson and Giovanni Ribisi share.

That is probably not on any of their CVs by the way.

Disoriented, confused and alone, Bower gets no early answers, so he goes looking around, apparently his search precedes Payton’s awakening by about an hour, and together they agree to find out what the hell is going on.

The early scenes are quite effective, as the unseen potential menace is somewhat more scary and freaky than the Beyond Thunderdome enemies that actually appear later. As Bower crawls through the dark recesses trying to move around the ship there is a distinct The Descent vibe, which is generally a good thing in my opinion.

After a while Bower gets through to the main ship area, where he finds other survivors, which is both good and bad. Good as one of the early meetings involves a fit looking chick with shiny cleavage that might as well have an arrow pointing at it, bad when the cannibalistic spiky, Descent-esque, Skekksi-ish guys show up to nibble.

So with this new information onboard Payton becomes Bower’s personal Nav-Man, leading him through the terrain to try to get to a place where he can control the ship. As this goes along both of them start getting flashbacks of previous events to their hypersleep, some of them disturbing, some not so bad.

Bower comes across a few inhabitants, again some nice and some nasty, but after a while a compact unit of Bower, the shiny-cleavage girl and a Grunty No-Speaky guy forms.

Also to give Payton something to do in the film aside from waiting for the credits another crew member shows up, the naked, greasy Cpl Gallow.

So our three-person team of goodies finally gets to fight one of the “things” 3:1, and find that they are virtually indestructible even with a personnel advantage and various weapons on hand.

Without going further similarities to Event Horizon continue cropping up, most notably in the final 10 minutes, and the ending is a little cheesy.

Certain characters and circumstances veer dangerously into ludicrous territory, and even when you know the full story certain parts are hard to stomach.

Final Rating – 7 / 10. Walks the tightrope between cheese and OK space drama and remains mostly, (“Yes Newt, mostly”) on the right side of cheesy. The good bits make it worth sitting through the rest.