Cloudy With A Chance Of Meatballs (Review) 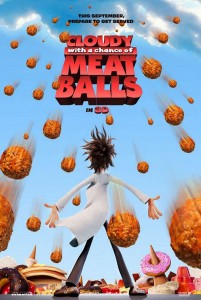 There’s a new animated movie out almost every week nowadays, The Princess & The Frog, Planet 51, Alvin & the Chipmunks are all out or coming soon right now.

Going back a few years there were less, and there was a far better chance that whichever one you chose to see would at least be watchable. It is far harder to pick in advance these days.

Most animated films understandably go for the kids demographic, that opens up marketing spin offs and greater sequel potential, as the box office sometimes isn’t as relevant as the marketing cash. (Monsters Vs Aliens springs to mind.)

To get the kids along, especially the pre-teens, you need to have something that a parent wouldn’t mind sitting through, as they will likely need to accompany their tots. You could give me Chinese burns for a year and I still wouldn’t want to see the Alvin & The Chipmunks movie, or anything where the main selling point is the celebrity voices and not what the story is about, (Monsters Vs Aliens again).

In saying that I have seen most of the Pixar movies in the cinema, without any kids along, as they are worth seeing regardless of age.

What I am getting at is that animated movies are far more hit and miss than they were a few years back, and lately they are everywhere. One misleading preview or poster can have you watching 80 minutes of thinly veiled toy promotion, but ignoring or dismissing the genre altogether may have you oblivious to quality flicks like Monster House, Igor or Cloudy with a Chance of Meatballs (CWACOM).

Don’t let the “based on a kid’s book” fool you. After all, Horton Hears a Who turned out OK, and this is if anything a little better than that.

Flint Lockwood is not a cowboy, I repeat NOT a cowboy, even if his name says he should be. He is actually a young kid inventor (at the start of the film), whose curiosity and idealism leads him to endure public ridicule, as early inventions are a little less than earth shattering. His Mum and Dad stick by him all the same and provide support for his aspirations, even if they don’t fully understand them.

Flint is a citizen of Swallow Falls, a small seaside town famous for its sardine industry, though in recent years the area is slumping as sardines are a little less popular, anyone who has sat in a lunchroom when someone cooks then can attest why.

Fast forward to young adulthood, and the 18ish Flint has continued inventing, with his biggest sorta success being a talking monkey named Steve, and apparently a new invention that converts ordinary water into food. Don’t ask how, it’s a movie.

Other things at home aren’t so rosy, Mum has passed on, Dad isn’t too happy and on top of that the continued decline in sardine PR has meant his sardine shop is running on fumes.

The mayor of Swallow Falls hatches a scheme to bring the town back, he changes tack and decides to set up “Sardineland” and market Swallow Falls as a tourist destination. Now before you get online to buy your tix to Sardineland I must assure you it is made up and doesn’t exist.

As expected Sardineland blows, and Flint skips the unveiling to continue work on his water/food converter, and as this is a movie things go haywire and the converter is inadvertently sent into the atmosphere, ruining the grand opening of Sardineland in the process and drawing the ire of the Mayor and the locals, including Dad.

Now the poster, previews and even the title tells us to expect culinary precipitation, and golly-bob-howdy if that isn’t exactly what we get. After Flint learns to control his invention people actually start putting in advance orders for birthdays, anniversaries etc.

Initially the townspeople are exceedingly grateful, because as well as having something unfishy to eat they are also immediately put on the map and draw in crowds of visitors.

Down the track however things go awry, and Flint and his new pals must step in to save the day.

What makes CWACOM a success is the characters, although some, if not most of the characters are voiced by actors it doesn’t distract from the action, also, more than anything the creators were smart enough to put in actual jokes to keep you amused. I laughed often through the movie, and while I haven’t put this to the test yet I think this will be a movie with high re-watchability.

Back to the characters, Flint, voiced by Bill Hader, is actually quite low key and likeable, as is the love interest Sam, an intern weather channel reporter who stumbles upon a career-making story from the sky. Their fledgling relationship comes along slowly and believably, as they realize they have far more in common than they thought.

As always it is the bit-parts in animated movies that are given the longest leashes, the Mayor is a bit of the bad guy stereotype, but he does get some of the best lines, and his overindulgence once the chubby-rain begins leads to some sight gags. An advertising kid, formerly named Baby Brent but now grown up and more than a little pathetic is also welcome, but the show stealer is Mr T, in his best (only) role since Rocky III, as an overzealous cop hellbent on preserving law and order and looking after his young son.

The rain effects are amazing and awesome looking, especially a spaghetti-twister and a food-o-lanche later in proceedings. Apparently food related natural disasters lend themselves to an animated setting with the vibrant colour and movement. The second half of the film moves at breakneck speed but the pace never goes too fast that the story is hard to follow, there are a few jokes that will fly over say a 6 year old’s head, but enough other stuff to keep everyone from 5 through 13 amused.

The ending is also gloriously over the top and insane, who can say “no thanks” to scenes with mutated angry, protective food?

There could have been a few more “fat American” jokes aside from the mayor, but perhaps the creators feared the inevitable backlash that honest commentary often brings. (As an Australian I can’t distance our culture from the US too much either, though on my one trip to the US earlier this decade, myself and my wife had a “fat person” of the day photo, which turned into an eye-opening collection once we arrived home. Can’t say I ever felt impelled to do that here.)

CWACOM has some great setpieces and action, some snappy dialogue and amusing sightgags, it also effectively straddles the line without being too kiddy nor too adult-oriented. I recommend this for anyone who watched Horton Hears a Who and liked it, but this is definitely funnier.

Final Rating – 8 / 10. I may be wrong but I don’t think I have enjoyed a kid’s movie this much since Monster House, (Up and Wall-E are better, MH more enjoyable). This is a kid’s movie that justifies a trip to the cinema.