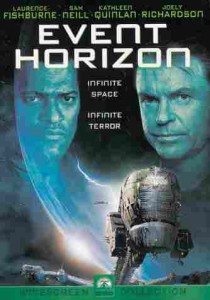 I agree, doesn’t look scary yet…

Event Horizon is at once frustrating and effective, the frustration comes in revisiting the film and realizing that while there is much to admire, there could actually be so much more. The effectiveness comes from the lengthy build up and gradual escalation to the climax that largely lets you ignore the film’s failings.

Realistically there have been many films set in space over the years, more than a few have aspired to including horror elements, not many have been as well made as this.

I originally saw this in the cinema when it was first released (1997) with a mate Ringworm, yes we were 2 of the 73 that paid to watch it. We both walked out and agreed that while it wasn’t very scary it set a good tone and was definitely building up to something, only it seemed to run dry of ideas and tacked on a hastily conceived ending to wrap things up.

This was a promising film and I keep waiting for the rumoured “more violent and full on” Director’s Cut that I read about every so often. Unfortunately Paul Anderson didn’t build on this promise as everything he has done since has far more commercial leanings, Resident Evil and Death Race included. Perhaps he has simply plateaued and it is his destiny to make films with a few good bits, but generally no depth or lasting qualities.

The Event Horizon was a deep space exploration vessel, but it disappeared on its maiden voyage in 2040. It is now 2047 and the thing has simply reappeared. This has resulted in what they term a rescue mission, but is really a “what the fuck happened?” mission.

The team boss-man is Laurence Fishburne (who is still amazingly underrated) and his crew include 7 other members, 6 guys and 2 gals. 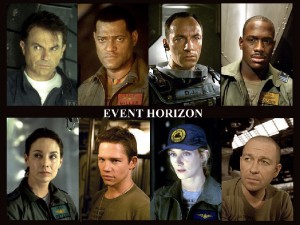 The crew. (Now THAT was a handy find!)

Before commencing the mission proper Dr Weir (Sam Neill) explains wassup. It comes to light that he was the designer of the Event Horizon, and that it is actually a vessel capable of travelling at greater than thought possible speed due to its ability to “bend space” to suit its needs.

My argument is if they thought faster than the speed of light travel wasn’t plausible then how the hell are we expected to swallow “bending space”? Because this isn’t Star Trek, that’s why, shit just happens to justify the shit that follows.

Once aboard the crew search for clues that may explain what happened, both to the ship and previous crew. There are signs that something is a little “off” but nothing conclusive until one of the younger crew members reaches the core of the ship and things go awry. To add insult to injury the rescue vessel the “Lewis & Clark” is damaged and if unrepaired would run out of air within a short time. Always the way.

So with the young crew member Justin catatonic the survivors come up with theories, the overriding theme being that the ship won’t let them leave and is in fact evil itself. Another neat wrinkle is that the ship is perhaps opening doorways to other dimensions, and not all of them are nice. The good Doc pooh-poohs such theories immediately, even as the crew openly wonder exactly where the Event Horizon might have been for the last 7 years.

Shortly afterwards they manage to access the ships’ videolog, which gives some pretty gory clues as to what may have happened to the previous crew. Think a picnic on the beach, only with cannibalism, self mutilation and orgies of violence and you’ll be pretty close to the mark. Sooooooo… understandably everyone wants out. Now. As they prep for their escape each of them sees things and people from their past, often that only they themselves know about and whose stories they have kept hidden for many years. The ship, or something aboard, is preying on their personal fears and affecting their psyche.

So we get many scenes that are actually quite tense and disturbing, even though we often don’t know exactly what is the problem aside from “why is that strange new guy/kid/woman on board all of a sudden?”

There are some good gore scenes and notable death scenes that pull no punches and make me curious as to what the full-on unreleased version contained, if exploding eyes and having sex while simultaneously appearing to eat your partner isn’t enough then I am confused.

I see your problem there honey.

You also haven’t seen Sam Neill like this, his Dr Weir and the ship seem to have a bizarre and disturbing synergy, and he grows very protective of his bubba as it becomes obvious what the others have in store for it.

I haven’t mentioned the other crew simply because there is no need, they are there to further the story and either die horribly or cheat death. But I will say that they are effective and no-one lets the team down too much. I wanna bag Joely Richardson a little but her sister (Liam Neeson’s missus) died last year so I’ll cut her some slack.

Event Horizon is filled with freaky imagery, effects and in the latter stages makeup. The production design is first rate with everything looking suitably space-ey even though I think this was a pretty low budget film. The finale didn’t quite meet the promise of the first hour or so, but before the bang-bang ending Event Horizon enjoyed a first rate build up and deserves its place in all the underrated lists that it finds itself on, even if it is a step down from the greats.

Final Rating – 8 / 10. The guys on Family Guy were right. There are scenes and images that are worthy of discussion. Even if ultimately the film never rises to greatness in any way there are some small touches that elevate this above many also-rans.