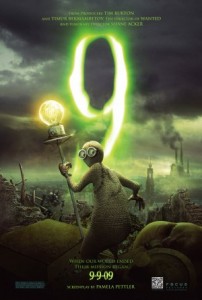 I shouldn’t like this, it is thinly plotted and the plot that does exist is derivative of many other films over the last 20 years, some of them good, others not so much.

But I did like it, and I watched it again just to be sure and still felt that way.

This is a case of the pluses far outweighing a few negatives, which if you can forgive, or even better ignore, will allow you to appreciate a film like “9” all the more.

Set in a dystopian possible future (aren’t they all?), a rag doll, complete with a big zipper running down his chest, “wakes up” to find a bleak apocalyptic world. Having apparently been inanimate up to this time he is unsure, unknowing and unprepared.

For those keeping score that is too many “uns” to be confident.

After some basic self-maintenance (not that kind kids) the doll steps out into the world, and shortly after finds a similar yet slightly different companion, also #’d, in this case #5 is written on his fabric body.

Our hero is #9, and is voiced by Elijah Wood – pretty well too – I must say his voices lends itself to expressing curiosity and amazement without Jack Black histrionics.

Unfortunately #5 doesn’t last long, he is taken by “The Beast”, a mechanical dog sort of creature with glowing red eyes. While around he is able to pass on a strange gizmo to 9, which he keeps.

Not too long after (this is a 70 something minute movie after all, no dilly-dallying) 9 runs into other “dolls”, including the leader #1, who is highly conservative and cautious. It appears that everyone is gone, aside from the numbered Cabbage Patch-esque survivors and afore-mentioned Beast. 9 is sure “Number 5 is alive”, and wants to go save him, only he can find no other willing to go along. Until # , voiced by Charles Nelson Reilly (again well suited as a gormless, impressionable yes-man).

So our numeric heroes set off into the bleak, Terminator 4 landscape, losing their only map in a poorly timed duststorm, they nonetheless are able to save 5 in a well conceived and visually inventive animated action sequence.

Actually everything about this movie is visually inventive, regardless of what you think of the film it is a brilliant visual achievement, and even the ugly looks gorgeous.

Back to the action, the gang, now joined by #7, played by Jennifer Connelly who is the only voice that seems a little out of place, though I’ll forgive her as I have had a crush on her since Career Opportunities. In the aftermath of the action 9 feels impelled to use the gizmo, and inadvertently alerts other bad robots, in another good action scene they barely get away.

Events transpire that our heroes, now numbering the full quota of 9, are set upon once more by the naughty robots, and some are taken away. The others (somewhat understandably) blame 9, and much is discussed as to what is the next course of action.

Without giving much away there is an early victory for the group, which if nothing else teaches us never to celebrate Return of the Jedi on Endor style (or Dora the Explorer “We did it” for those a little younger) when there is 25 minutes in your film to go.

Unless it is the Lord of the Rings, in which case just tack another 45 minutes on if you like, hey Peter?

I recently watched Inglourious Basterds and as various faceless members were offed I really didn’t care much. Here we have what is essentially a bunch of Raggedy Andy’s and I actually had a sense of loss when some of them departed the action, moreso because the remaining characters acted as if they themselves had lost something.

There is an ending with a message that you read what you want into, a Christ parable or whatever, in any case it isn’t a copout or pointless conclusion.

I myself found it OK and in line with the rest of the film, but I am a guy that refuses to give credit to George Romero for his supposedly deep messages within his zombie movies. Sometimes movies are just movies.

Read an inspiration calendar if you want something deeper.

For some reason I kept thinking of a 20 odd year old French film Delicatessen, even though they share precious little similarities I think I felt the tone and designs were similar. Decide that for yourself.

One last thing. This is a movie that goes LOUD! Quiet… LOUD!! Quiet.

Characters are “removed” from the action, and sometimes they don’t return.

Long story short this is not a kid’s animated movie.

Final Rating – 8 / 10. I repeat, not a kid’s movie. This is not a film that lends itself to marketing, but it is a visual triumph with some great action scenes and an “iffy”, but ignorable message.