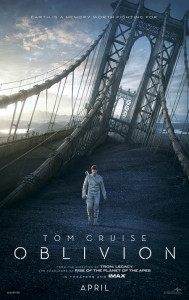 Wow. Nice rip of the I Am Legend poster.

Oblivion and Tom Cruise share a lot of similarities. They are both shiny and expensive looking, with pleasing exteriors. They are also largely charisma free, chock full of manufactured emotion and ultimately will only appeal to the easily pleased.

Oblivion takes place some 50 years after the Earth was rendered practically uninhabitable after someone stole the moon, sending our fragile climate into disarray and leaving us vulnerable to attack, which arrived in the form of ‘the Scavengers’, some of whom still lurk about the place causing mischief.

With the bulk of Earth’s survivors fleeing to Saturn, Earth is practically barren, with only small numbers of maintenance teams remaining to monitor systems and maintain the ‘drones’. The drones are large white flying robots which cruise the harshest terrain, surveilling and patrolling. What they are protecting is anyone’s guess seeing as how everyone has buggered off and left Earth for dead anyway, but I digress.

Tom is Jack Harper, maintenance man. He and partner Victoria are charged with maintaining the drones in an isolated outpost that exists in one of the rare inhabitable areas between the ‘radiation zones’. Both Jack and Victoria have had their memories of the past wiped in full (which is why Jack doesn’t know the bobble-head on his dashboard is Elvis and not, as Jack calls him, “Bob”. *chuckle*), though Jack experiences vivid dreams that may or may not reference things of his true past.

Jack cruises about in his tricked out spaceship, which in truth is the only ‘cutting edge’ visual in the film. He tightens a bolt here and changes the oil there on the droids – though in truth these heavily armed machines seem quite capable of looking after themselves, thanks very much – while Victoria totters about their home base in high heels, updating Jack on relevant computer readouts and reporting back to a woman who seems the face of ‘head office’ periodically to take great pains to declare that they remain an ‘effective team’.

For mine Jack and Victoria are ‘Team Wall-E’, which I guess makes Tom the cockroach…

The first stanza of Oblivion washes over us in a dreamlike haze, all pale colours and painfully slow exposition of nothing. Then finally things heat up when the duo find their bland Tea for Two gatecrashed by many, which if you think about it makes a mockery of their so called surveillance and monitoring…

You don’t have to watch too hard to see the influences. There’s a scene from Star Wars. That theme is ripped from The Matrix. Hey that’s just like Moon. Gee that reminds me so much of 9. Oh that’s so Raven!

Only there isn’t a standout scene or even a moment to match the best of any of those, which is disappointing as I found Moon a little overrated anyway.

Furthermore the film becomes increasingly ‘twist-happy’ despite the fact that each ‘startling new development’ is either set up way too early, or is underwhelming. One such amazing revelation bubbled away for so long that I felt like screaming ‘Just say it already’!

The only reason I watched Oblivion was because the trailer looked cool and because I naively got sucked in by critics across the globe rabbiting on about the outstanding visuals. When people talk ‘outstanding visuals’ without referencing the film’s other qualities, that is code for there are no other great qualities, and the writer trying to come up with something positive to say.

I understand the desire but find reason to disagree. The Tom Cruise robot plays a nice guy in public and would be a powerful enemy. I have no image or rep to worry about, so I can say with confidence that Oblivion is a dull film lacking inspiration, and that as far as i was concerned not even the visuals were that outstanding.

In fact behind Oblivion’s flawless skin and pretty smile is a big vacuous phony that thinks itself better and more worthy than it is.

Final Rating – 6 / 10. Morgan Freeman is in it. He is a great actor, but he is in a lot of things. I would suggest you find one of his other films before you bother with this.