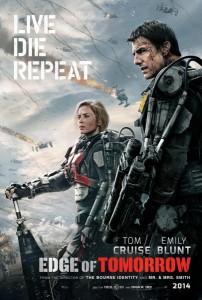 When the mech invasion came we were – once again – embarrassingly unprepared. In a short space of time these robotic alien forces had wiped out entire cities and taken key areas as their own. In an all too rare display of global solidarity, all the world’s armies unite as one to defend our lands.

Despite being a Major in the US Army William Cage (Tom Cruise) is no soldier. He just plays one on TV. There is no doubt a fancy name for his role but Cage is essentially in marketing, a talking head for the panel shows, a media spruiker promoting all that is good about serving in the armed forces. A man with a few well worn stories and responses to standard lines of questioning, Cage inevitably works his way into grandstanding about the positives.

Positives like Rita Vrataski (Emily Blunt), a formerly unknown soldier who nonetheless managed to turn the tide in a key battle through sheer force of will, now fondly referred to as ‘Full Metal Bitch’ and grinding away on the front line of a new offensive.

But Cage has no script for how to react when he is told that he is next to head into battle. No number of the famous Cruise teeth and lashings of his faux sincerity can persuade his superiors otherwise. Maybe Cage has performed his promotional duties too well, but once you’ve convinced everyone that the war is necessary, then the need for fresh soldiers outweighs the need for new marketers.

Cage arrives at the wrong end of boot camp, where everyone is prepped, drilled and ready, platoons of soldiers have developed a trust and chemistry – and a wariness of outsiders, and Sergeant Farrell (Bill Paxton) is already in mid-season belittling form. (Interesting to see the career arc of Paxton, nearly 30 years ago (!) he was the sniveling grunt, now he’s their leader.)

And so it comes to pass that Cage, less than 24 hours since standing slack jawed in front of his superior, finds himself in freefall, hurtling towards a pitched battle, wearing a big clunky suit that forces soldiers to run like bow-legged pensioners on the way to the bathroom.

The enemy are indeed fearsome; dubbed the mimics, they appear as large metallic scouring pads possessed by the spirit of the Warner Bros Tasmanian Devil, twisting and turning and appearing from nowhere to eviscerate. Cage is, as you would expect, woefully out of his depth, and within minutes he comes face to face with Rita the Full Metal Bitch, before having his own face literally melted under a stream of Mimic goo.

The film is maybe 20 minutes old, and our hero is dead. And in truth I would have been pleased to end it there.

Wasn’t to be. Nor would it be the last time Cage was to die, as every preview would tell you.

Discussing the whys and hows would be unproductive, but if you’ve ever stood behind someone playing a first person shooter and pointed out bad guys for hours on end, the rest will be familiar to you.

The battle sequences are intense and frenzied, but grow less so on the 47th time around, especially once you realize that these allegedly indestructible Mimics can be taken down with a single shotgun blast.

Cruise once again does his darndest to give life and passion to what is essentially a lengthy video game stage with infinite lives and no save points. Blunt gets her action queen on, but aside from scenes where she pushes Cage around in a training area, she generally takes a back seat once the bullets fly.

You can see the money dripping from the screen in every scene, but unlike Looper and the like, not so much inspiration is evident. Edge of Tomorrow is a perfectly adequate star driven action flick that seems derivative of others and most importantly is unlikely to even once have the hairs of the back of your neck stand up. It’s a solid two hour adventure that you will probably not wish to ‘play through’ again, unless they come up with a video game version (I would find so many ways to have Tom Cruise die). On second thought maybe they just did…

Given the striking similarity to both Source Code (a film that did much more for less) and Groundhog Day (a different genre altogether but with practically the exact same theme); what do you call the feeling you get when you feel you’ve seen or experienced something before? Especially when that sense of… something, is directed at films all about overwhelming déjà vu… I wonder?

Final Rating – 7 / 10. Two hours of Tom Cruise being killed is at once better, and worse, and somehow the same, as you might think it would be.