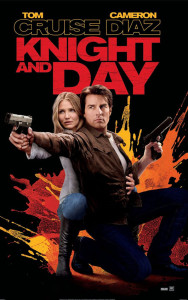 Terrible title by the way.

After not one, but two excruciating ‘meet cute’ bumps in a two minute span, ordinary June (Diaz) is drawn into the high octane, high danger world of Roy (Cruise), everyone’s favourite pro-Scientology watered down James Bond when the almost empty plane that they are aboard turns out to be infested with evil enemy agents hellbent to do Roy harm.

But over the next 110 pulseless and charisma free minutes, we learn that Roy is nigh indestructible on land, sea and air.

This is mass murder at its most marketable. Roy lays waste to every oncoming horde of faceless bad guys as June stands by wide eyed and even wider smiled as he gets his video game on.

As a duo the Diaz / Cruise combo has more teeth than Shark Week.

Maybe it’s the enhanced thetan levels that allow Roy to remain unflappable in the face of danger. Maybe it’s the help of a constant stream of CGI, the same CGI I might add, that allows the two leads to strip down to their swimmers on more than one occasion.

Maybe – actually most likely – millions don’t actually want to be challenged by their movies. They want the comfort of two grinning mechanoids who have been in the public eye for decades, going through the motions in front of nice scenery.

I wish I was as easily pleased. This made me feel like my eyes were full of hungry burrowing wood larva with a newfound taste for eyeball juice.

Final Rating – 5.5 / 10. Tom Cruise and Cameron Diaz are the two fakest stars in Hollywood. Support them with the best CGI that money can buy and a soundtrack that keeps it real featuring Will.I.Am… Wait. Is any of this remotely real?