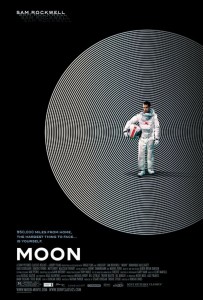 The SFX are more realistic in the film.

I heard about this months ago, and similarly to The Invention of Lying I hung around waiting for news as to when I might get the chance to check it out for myself.

I watched Moon, The Invention of Lying and Big Man Japan all in the same week, each of them sounded good…

And yet they all were ordinary.

Put simply I don’t see any of them in my long term movie watching future.

Moon was the best of the mediocre bunch, simply because it tried so hard to be good, or at least different. I still couldn’t be bothered watching it again though, even though I know that the full explanation for the film most likely requires a second viewing.

It just wasn’t good enough for me to want to sit through the first hour or so again.

Moon opens with an advertorial that informs us that the moon has been identified as a huge source of energy for Earth, and that “friendly” big corporations are doing their best to provide us with reliable pure energy.

It seems one of these energy production centres on the far side of the moon is staffed by a lone maintenance guy named Sam Bell, who is at the tail end of a three year contract. His only companionship is a computer called Gerty who is sorta like the mechanical arms from Iron Man, only he has Kevin Spacey’s voice.

As Sam is all by his lonesome, he fills his time with hobbies, exercising, TV, tending to his garden and waiting for dispatches from employers and his family on Earth, which are delayed as the far side of the moon gets no live signals due to inaccessibility. His only action is when one of the many “harvesting” machines is experiencing malfunctions or needs maintenance.

On one of these call outs things don’t go according to plan, and Sam wakes up afterwards in an infirmary.

And this is where shit goes pear-shaped.

I’m not sure how SPOILER free people want their movies these days but as some key info is about to be outlined.

Sam is quarantined on base by Gerty, but he gets a bit toey and manages to con his way out with a plausible excuse, at which time he goes to investigate the crash site. The evidence from the accident is all around, and indeed there is still someone in the vehicle that requires urgent medical attention.

The remainder of the film revolves around the obvious questions and dilemmas that would arise when one unexpectedly co-habits with an exact replica of themselves.

So Sam(s) ultimately team up to work out just what the hell is going on, and what is really behind this perceived deception. They search high and low, on base and off for clues and evidence, which of course lead to conflict and disagreement between the Sams, and to them putting in place a daring plan….

I didn’t care which Sam was real, which wasn’t and why. The first plodding hour put paid to that. Other reviews have lauded the technical skills shown in having multiple Sam Rockwells onscreen at once, and that is honestly impressive. Also impressive is the on-moon shots that look especially realistic and cool, but the action (if you might call it that, I wouldn’t) is so slow that when the plot does advance rapidly near the end I was already out of patience.

I have consulted the imdb boards to make sure I “got it” when the movie wrapped up, and I am pretty sure I had most of it right before I went to the internet cheat sheet. That revelation alone was disappointing, as the fact that I did understand what happened and still wasn’t  blown away was annoying, as I waited 90+ minutes to get to that point.

I’ll leave it to the individual to decide if the ending gives merit to what came before, and I hope others get more from this film than I did.

Ultimately this was a fine acting performance by Sam Rockwell wasted on a lightweight twist that seemed to be only a mild surprise when it finally arrived.

Final Rating – 6.5 / 10. I think I am pussing out on this, I want to give a lower score but can’t help but feel there must be more than I saw. I won’t spend another 100 minutes of my time investigating this though.