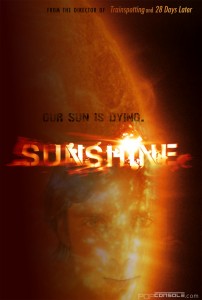 In the not too distant future our Sun needs a pick-me-up. The Earth doctors prescribe one dose of several mega-ton bomb. That oughta do it. Unfortunately the ship laden with both bomb and crew, the Icarus, never made it.

Enter Icarus 2, because what better than to honour the memory of a failed mission that brought total casualties, than by adding a numeric suffix?

The crew of I2 is eight strong – 6 guys and 2 gals from all over the globe, with different skillsets and specialties. The ship itself is big, with a huge central computer controlling most aspects, including screening the ship from the bulk of the Sun’s rays as they near the drop point.

The Sun might be hurtin’, it’s still pretty hot though…

Then from out of nowhere comes a signal. A signal from nearby. A signal from Icarus 1, which apparently is still very much around despite being labelled ‘lost’ some eight years prior.

The crew are left with tough decisions. Do they investigate to see if the crew might still be alive or if the other bomb might still be usable? Or do they carry on regardless with the tabled mission? This of course leads to arguments, sacrifices and much testing of patience and team bonds.

These decisions under strain lead to tension, a tension heightened when high tech things go awry, calculations are miscalculated and actions made under pressure have unforseen repercussions.

But this wasn’t enough for Director Danny Boyle, so he decided to inject a pretty major ‘twist’. A twist that brings unavoidable comparisons with the cult 90s sci-fi horror flick Event Horizon, that I think fitted in way better with that film than it does here.

Without spilling the beans on Sunshine I will just state that Event Horizon was sillier, gorier, hammier, less competent… and better than this film – at least in terms of enjoyment and viewer satisfaction.

The cast of Sunshine are fine – among them Cillian Murphy, Michelle Yeoh, Chris Evans and Rose Byrne – the setpieces predictable but well orchestrated, the space vistas spectacular and the fluctuating dials and readings always indicating greater levels of peril. But it’s just that after an earned build up in the first two thirds of the film and a finale suitably suspenseful and compelling, the mission and the film was always going to end up the same way.

Final Rating – 6.5 / 10. Sunshine ends up like 28 Days Later, a film with some memorable sequences and standout moments, but nonetheless one that seems to not fit together as it should.