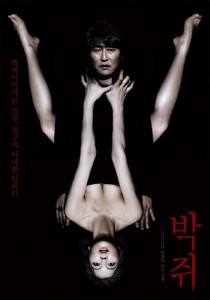 A few years back I saw Oldboy. Up until that time in my life I had watched hundreds of foreign language films, loved some and endured others, but nothing to that point gave me the adrenaline rush that this film did.

It was fast paced, at times shocking and always (even when it over-reached) interesting and different. Everyone else seemed to discuss the obvious live octopus and claw hammer fight scene, but to my mind Oldboy was 98% great, (just don’t get me started on the “giant ant on the train” bit.)

After Oldboy I sought out the director’s other films, loved Sympathy for Mr Vengeance, really liked JSA and thought Sympathy for Lady Vengeance was worthwhile also, if a notch below the rest.

For those keeping score at home, that is a 100% strike rate of 4 out of 4 films. If any director makes 4 strong films in a row I always look forward to whatever they come up with next with great anticipation.

So when I saw that director Chan Wook-Park had a new movie coming out, and that it was a vampire movie?

I mean come on. It has to be good doesn’t it?

Yes and no, Thirst holds true to Wook-Park’s deliberate skewing of conventions so that this is not your Twilight, Underworld or Lost Boys vampire film.

That’s a good thing by the way.

But at 2 hrs 15+ minutes there is a little too much “filler” here to sit through in between the stronger scenes, which realistically don’t have the impact of Wook-Park’s better movies.

The movie opens with a Priest named Sang-Hyeon, who is so selfless and giving to humanity that he volunteers himself as a test subject for a horrible disease that basically blisters the skin until the sores and boils explode and move into the respiratory system, killing the infected in a horrible and painful manner.

Sang-Hyeon is expected to die, indeed 500 other infected people did.

And he does, temporarily at least.

Upon his return he is now a symbol of purity, having been the only known survivor. He is treated much like a religious figure, something that he so uncomfortable with that he practically goes into hiding, staying with the family of a childhood friend.

Now the friend is basically an idiot, he is married but treats his wife like shit, as does his Mother who lives with them, but it seems at this point that Sang-Hyeon has nowhere else to go.

Unbeknownst to all else, as a result of the blood transfusion that kept him alive through his treatment Sang-Hyeon is now a vampire, but his religious beliefs don’t allow him to kill to slake his thirst. He instead volunteers his priestly services at a local hospital and siphons the comatose and suicidal. After ingesting the blood Sang-Hyeon is temporarily “super”, in a way that many other cinematic vampires are all the time, although without fresh blood he quickly reverts back to a deteriorating state until another fix is available.

Another side effect of gorging is that he is super-sensitive, and being around the young wife triggers thoughts that only dramatic bouts of self flagellation can quell, (look it up, it’s not what you think).

Eventually though Sang-Hyeon allows himself to let the “little priest” go to work, and he and the wife quickly embark on a passionate and clandestine affair, with each episode temporarily returning Sang-Hyeon to full strength.

It is at this point that Sang-Hyeon decides to tell the wife of his dreadful secret, and after the understandable initial shock she “volunteers” to join Sang-Hyeon.

Now that Tae-Joo is a member of the SPF 100+ club, this brings a new obvious wrinkle to her life, as she still must endure the unwelcome existence that is being the dogsbody of the childish Kang-Woo and his controlling Mum.

And from this point the dynamic of the film changes dramatically, with Tae-Joo rapidly coming to terms with the requirements that being a vampire necessitates, and Sang-Hyeon having his own self written code of ethics turned upside down.

Chan Wook-Park doesn’t “do” genre films. He seems to start with a core idea or plot element and builds around it with so many other facets that eventually what remains is a film that obeys certain conventions but twists the implementation to the point that the movie becomes almost impossible to categorise.

The two “sympathy” films were both revenge films at their core, as was Oldboy, only not in the Death Wish or cowboy revenge film way. Nothing is that simple in the Wook-Park universe.

Sang-Hyeon isn’t a bad guy in the way that we would ordinarily consider a guy who sucks the blood from the living, nor is he an anti-hero. He is a priest who has become a vampire not through choice, who has learned to deal with his situation.

Even the most obvious choice as the “bad guy” in this case, Kang-Woo’s Mum, is basically just doing what many other Mothers would (to a point).

Kang-Ho Song, who plays Sang-Hyeon, is in many Wook-Park films, and he is ideal here. He has a great round expressionless face that rarely shows any feeling or passion, and slits for eyes that also don’t give anything away, regardless of his circumstance, he is equally believable as both a priest and an unwilling vampire here.

While I liked Thirst, and I must admit I would have loved to have the opportunity to spruik a “Korean vampire movie” to my mates, I think that there is just a little too much missing here to give it a strong recommendation.

(Maybe I am a little disappointed because it was a great director that made this admittedly average film, I’m not sure yet.)

Final Rating – 6.5 / 10. Not a big step backward for Chan Wook-Park, but just a little below his normally strong output. Would benefit from a few more edits.

P.S. This is one movie where I will stay on the fence. I am not going to label this as either “crappy” or “worthwhile”, I’ll leave that decision in your hands. If nothing else it is worth seeing at least once to enable you to make that call.