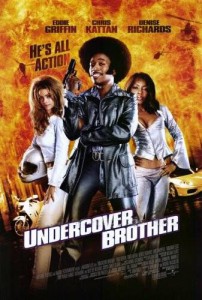 Too funky for myself!

In the same “dumb but harmless” vein of the SNL films (Roxbury, Ladies Man etc) comes a film based upon an online cartoon… and if that fact alone don’t get the blood pumping nothing will.

Like The Ladies Man if the first two minutes of Undercover Brother don’t elicit a grin then it’s a pretty grim 80 minutes ahead, as it’s largely the same from there. 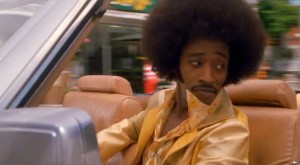 Undercover Brother himself (Eddie Griffin) is a 70s throwback, kung-fu film watchin’, funk listenin’, jive talkin’ chicken eatin’, black chick bonin’, caddie drivin’ orange soda luvin’ Brother who doesn’t seem to grasp the basics of a new millennium. A disco throwback with an insatiable thirst for justice and fairness to all things pro-black. He is also funny as shit. If you get this far in the film and don’t like him press eject cause it only gets worse.

Enter the BROTHERHOOD, which stands for something I can’t remember but is probably vaguely clever and totally unnecessary. A group of predominantly (see further down) black staff who seek to thwart The Man’s efforts and preserve the black experience for generations to come. The BROTHERHOOD are staffed by total stereotypes, but at least they acknowledge as much in the naming of most characters…

And Lance, the token affirmative action white guy played by Neil Patrick Harris. (Who would have thought that 2 of the better comedies with a predominantly non-white cast would have featured Doogie himself?) For some reason this cracks me up even though it also panders to every sarcastic stereotype of white guys going around. (Can’t dance, not cool, tone deaf etc.)

Our plot revolves around The Man trying to spread a “white-washing” drug through the black community using fried chicken laced with a mind altering drug, and fronted by a formerly admired black General with aspirations to politics who has apparently “sold out”, but is really himself under the influence of the drug and powerless to resist.

The BROTHERHOOD conscript Undercover Brother to help stop The Man’s plan, but first he must go through white-thinking training. Needless to say the montage shown before him has some of the more embarrassing atrocities ever committed by the white race. He must also learn to cope with mayonnaise, which we apparently all love for some reason.

Sent into the heart of The Man’s operations, UB must blend in by removing any trace of cool or blackness. The Man counters by unleashing White She-Devil (Denise Richards) as UB’s ultimate temptation and foe.

Once under her spell UB becomes temporarily lost to the BROTHERHOOD, and it is up to Sistah-Girl to go and save him. A catfight between She-Devil and Sistah-Girl in front of Undercover Brother and a couple of white henchmen remains a hilarious highlight as it gets more and more ludicrous, culminating in the both half dressed and slurping it up in the shower.

I laughed a lot in this film. I watched Harold and Kumar, both Wayne’s Worlds, The Ladies Man and this in the same week (they’re all only 80 minutes long) and this was by far the funniest and offered the most frequent laughs.

There are jokes about having a black President which show that they couldn’t see into the future, a great slo-mo car chase featuring golf buggies and enough good natured “Oh well black people do this and white people do that” jokes that made me wish you could get away with more political incorrectness when it comes to race these days. (But you can’t.) On top of this Conspiracy Brother is played by Dave Chappelle before he became mega-famous for Chappelle’s Show and he provides many bonus laughs.

The finale moves from a James Brown concert and ends at The Man’s island lair, where UB and The Man’s 2IC Mr Feather have the final showdown and Lance finally unleashes his fury. (Mr Feather (Chris Kattan) is a 50/50 proposition, half funny and half cringeworthy, mostly due to his attempts to speak “black” for comedy’s sake.)

Of course being a movie with a 70s throwback as the main attraction the music is funk-tastic and includes some of the better known hits from that decade, as well as nifty background tunes.

The whole thing seemed to set up a sequel that never came, which is a shame, because aside from a few clumsy missteps Undercover Brother is without doubt the most chuckle-worthy of the comedies I have seen thus far.

Final Rating – 8 / 10. The only drawback of Undercover Brother is the absence of one “huge laugh”. There are dozens of funny bits and chuckles galore but no eye-watering, cheek hurter.

That aside this is still very good stuff and underrated. Maybe the White Man is keeping a Brother down after all!