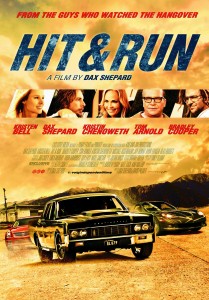 Ladies and gents, welcome to a new era in R Rated comedy, influenced by PC and moral decency, while retaining the smut, profanity and casual geriatric nudity that we have come to expect from such films.

While I don’t know about the ‘hit’, this film definitely has the ‘run’ covered.

Charlie Bronson (Dax Shepherd) is actually an alias, an aka demanded by his inclusion in the witness protection program. A name selected because ‘Charlie’s’ former name was deemed by him as too wussy. I guess Chuck Norris was taken…

Then Anna tells Charlie that she has landed her dream job, a once in a lifetime opportunity that requires her to move thousands of miles wear to Los Angeles. Ever the sensitive bf, Charlie tells Anna to follow her dreams. This leaves him two choices; remain in Nowhere USA as nobody Charlie Bronson, or leave witness protection for LA and keep his girlfriend.

Charlie chooses B, and tells Randy that he is heading out alone voluntarily.

Unfortunately part of the move includes notifying Anna’s ex, who of course hates Charlie, and performs some quick detective work, coming up with both his real name and a former business associate. An associate who very much wants to talk to Charlie in person. 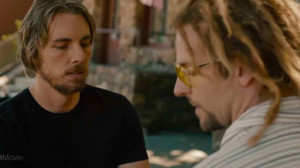 “Dude, we need to talk about this Gary Oldman fixation.”

This man is Dmitri (Brad Cooper), a ‘Drexl from True Romance’ looking douche who is nonetheless a very dangerous customer indeed. Dmitri is travelling with his girlfriend and both jump at the chance to intercept Charlie when contacted via Facebook.

Thus begins a screwball action comedy that is in reality little more than a series of car chases padded out by some insightful and mature PC dialogue, with the usual sex stuff remaining.

Charlie and Anna have intelligent conversations about why casual marginalising phrases are wrong even by the well meaning. Elsewhere there is a running joke about a ‘gay sex seeking’ app that sees no humour in the gay angle, and there is a telling scene that details prison rape and the subsequent stereotypes that such a concept brings to mind, that seeks to show that we shouldn’t stereotype people – even when the topic is prison rape. This is the new PC, where race is irrelevant, male rape is not a punch line and you can’t throw out a casual epithet without a serious conversation afterwards.

Hit and Run was written and directed by Dax Shepherd, using his own money and his own cars. He even does most of his own stunt driving in the many chase scenes. He is clearly a savvy and already competent writer and film maker, already leapfrogging above those that made Your Highness and 30 Minutes or Less, I would place Hit and Run as a peer for such films as Pineapple Express and Attack the Block – not great yet but I like where they’re headed.

Final Rating – 6.5 / 10. I was already feeling the My Name is Earl vibe well before Beau Bridges showed up. That’s a good thing by the way.