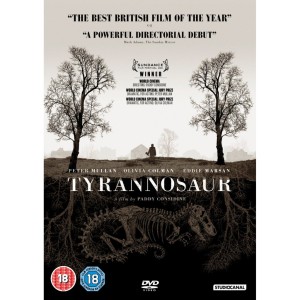 Joseph (Peter Mullan) has struggled to keep his temper since he lost his wife. The constant drinking and dim world view doesn’t help, neither does the fact that in the housing project in which he resides the locals are just as likely to ask “what’choo starin’ at?” than say hello. And Joseph stares a lot, because if it gets the response he wants then he gets to dance his special dance…

Joseph has people he talks to – other drunks mostly – but no friends. In fact the nearest thing to a friend that he has is the young boy who lives across the road. The one with the abusive stepdad who is often shirtless and the negligent mum.

Drinking is both a release and a trigger for Joseph, who doesn’t want forgiveness or redemption or to be saved. Based upon his self destructive behaviour there is every chance that he doesn’t want to ‘be’ at all.

After one outburst leads Joseph to seek refuge in a second hand clothes store, he meets Hannah (Olivia Colman), a friendly 40 something woman who reaches out to Joseph.
Joseph (figuratively) spits in her hand, then unleashes a barrage of profanity laced cutting comments to ward off the humanity.

But Hannah keeps reaching, even though she has problems of her own.

Hannah has an abusive husband (Eddie Marsan) at home. A jealous petty man with a temper. Hannah drinks too. Unlike Joseph she at least feigns happiness even as her world crumbles.

From the opening scenes Joseph and Hannah seem destined to cross paths, but don’t start thinking about the fabulous turnaround in fortune or the wonderful message that the inevitable happy ending might bring. This isn’t that kind of film.

Peter Mullan is all beaten down intensity as Joseph, a man for whom any semblance of joy or passion has been replaced by mindless rage. In one scene Joseph takes to a tin shed with a sledgehammer, raising the ire of a neighbour who advances with a spray of abuse and a vicious dog. For some minutes we don’t know what Joseph might do, we just know there will be no winners in such an aggressive display.

Olivia Colman too is astonishing as Hannah, who unlike Joseph seems determined to fight for her sanity even as the world conspires to crush her.

Tyrannosaur is not a happy film. Your heart will no be warmed. Your faith in humanity will not be restored. Most films would have you believe that there is decency in everyone if you dig hard enough. Tyrannosaur tells a tale of many characters tired of digging.

Final Rating – 8 / 10. Paddy Considine crafts a powerful though extremely black film in the same vein as Naked. They don’t make films like is in Hollywood.