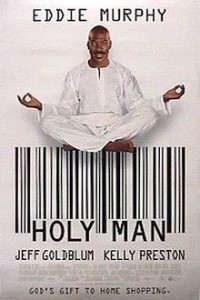 I guarantee you the script for Holy Man sat on a shelf for years until they decided to try to milk a few more bucks from Eddie Murphy’s tiring carcass. Ironically though it is Eddie’s phoned in performance that dooms this flick to 2 am screenings and video shop obscurity.

Eddie plays G – just G – a swami type on a pilgrimage to nowhere. G is confident, friendly, calm and assured, just the qualities that Home Shopping Network producer Ricky (Jeff Goldblum) has been training his employees to fake for years, with dwindling success.

Ricky is on the clock, his plush lifestyle and solid income at risk as his channel’s sales freefall. After a rocky start Ricky has a wa-hey moment and decides to unleash G upon his viewership. Of course in an ‘it only happened because the movie said it happened’ moment G is an instant success. Sales go through the roof, distributors clamour to have their products pushed and a cult icon is born, all despite G never actually trying to sell something. And rarely seeming to have a point to his long rambling stories.

There is an early scene that hints at something more, where G holds a small cocktail party in the palm of his hands with some dime store magic tricks and hypnotism. But unfortunately the rest of the movie isn’t nearly as gripping.

I fail to see how an easygoing friendly type could be so allegedly magnetic and hold universal appeal just because a film said so. Then again Paris Hilton was famous for a while there, so what do I know.

What I do know is that this film didn’t make me laugh once. I think I may have smiled momentarily a couple times, but I couldn’t help but feel that Murphy wasn’t trying enough and Goldblum was trying too much. I also couldn’t work out which one made the right choice.

Speaking of Goldblum, he is of course faced with the inevitable dilemma of continuing to use G for his own personal gain or taking the high road. You’ll never guess what he opts for… In other news Robert Loggia plays the ‘at all costs’ station manager and Kelly Preston Ricky’s colleague and love interest Kate.

You’ll find no hard sell late night TV push here. Unlike Ricky I realise that with Holy Man, I really don’t have a product worthy of flogging. So I won’t.

And really that’s all I have to say about that.