The Man with Two Brains (Review) 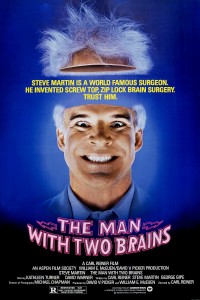 See I told you, comic genius!

I recently trawled through the collection of a mate with a large and diverse movie collection, borrowing a bunch of DVDs to work through. The resulting reviews were posted in recent months and include Set Up, The King’s Speech, National Lampoon’s Dirty Movie, Buried and 127 Hours.

As you might guess I was more impressed with his Steve Martin collection and took Dead Men Don’t Wear Plaid. Only the limitations of time and my puny arms prevented me from grabbing more, so I missed The Man with Two Brains first time around.

Where Dead Men Don’t Wear Plaid was an ambitious and clever film it was still a bit of a snoozer. The Man with Two Brains is classic Martin and has his fingerprints all over it.

Martin plays Michael Unpronounceable (he has a surname with many consonants that it seems only he can say properly). Despite being the most renowned brain surgeon in the land Michael is lonely since the death of his wife. That is until that most fortunate day when he hits a woman with his car at high speed. A woman with a killer body and a smoky voice that Michael saves from death and painstakingly nurses back to life.

Dolores (Kathleen Turner) awakens from her coma to find that the man beside her hospital bed is both the man who nearly ended her life and the man who saved it. He is also a mega-rich brain surgeon, which is the piece of information that Dolores finds most relevant.

After a bedside courtship Michael and Dolores are married, enjoying a short period of bliss in each others company. However once Dolores recovers enough to join her husband in his spacious mansion she immediately becomes withdrawn and somewhat reluctant to express her intimacy in a physical fashion. You might also say she is frigid.

The Man with Two Brains is full of Naked Gun style over-the-toppery and ludicrosity, thankfully most of it on the right side of silliness, with some of it downright inspired. Steve Martin sells the hell out of every joke regardless of how inane it seems, then exhibits his innate comedic genius by maintaining a straight face while all around him is ridiculous.

And where else will you see Steve Martin juggle while simultaneously singing and tapdancing?

The film skirts around the inevitable development for a long while as you the viewer think ‘surely he must think of it soon’. But you would be a fool to berate the film for a little filler when it provides the opportunity to watch the great Steve Martin in one of his most imperious performances. With anyone else in the role this film might be a forgotten relic of a bygone era – Bruce Campbell mined similar territory in his own Man with the Screaming Brain but couldn’t find the laughs – With Steve Martin in the lead The Man with Two Brains is a minor classic.

Final Rating – 7.5 / 10. For those that think Steve Martin is the banjo playing guy from Bringing down the House and Cheaper by the Dozen, you owe it to yourself to check out this film. While you’re there find Bowfinger as well.