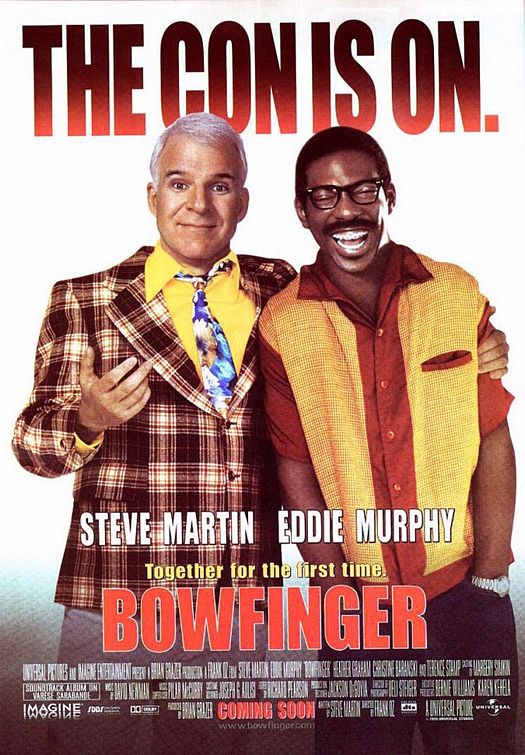 Bowfinger is brilliant and under-appreciated. While Groundhog Day has justifiably gone down in history as one of the best comedies of all time Bowfinger is just another flick, one all too frequently ignored. (Though when I think about it I left it off my Top 10 Comedies of All Time list also.)

Bobby Bowfinger (Steve Martin) is a struggling filmmaker who tires of missing the big projects, of being ignored and unknown by the big names, and of being doubted by those loyal to him… and perhaps a little tired of doubting himself.

So as another project threatens to slip through his fingers Bowfinger decides that he will make his magnum opus entitled ‘Chubby Rain’ – a film about an alien invasion with the invaders smuggling themselves to our planet in raindrops – around Kit Ramsey (Eddie Murphy), the biggest movie star in the world, by filming non-Kit scenes as normal and having his own actors approach an unaware Ramsey and deliver lines while the camera crew hide remain secluded.

Bowfinger convinces his rag tag crew of aspiring wannabes and impressionable yet deluded staff that Kit Ramsey is merely ‘100% method’, and is so consumed with his performance that he will not acknowledge or interact with them outside of his scenes.

It helps both Chubby Rain and the film that Kit Ramsey is especially paranoid and delusional in all respects, on the verge of cracking altogether and constantly in touch with a Scientology-styled wellness centre called MindHead, run by Terry Stricter (Terence Stamp). 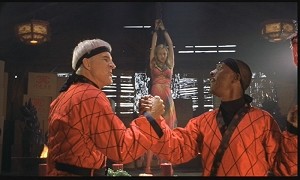 So it’s agreed: You never act with Queen Latifah and I’ll never voice a donkey!

At first things go reasonably well, experienced ex-stage actor Carol (Christine Baranski) is impressed with Ramsey’s realism as he appears genuinely believable in scenes that require him to be caught offguard and confused, and aspiring straight of the bus actress Daisy (Heather Graham) takes any action necessary to further her role in the film and her fledgling Hollywood career.

Things look pretty rosy, but when Ramsey checks himself out of society for a while to deal with his paranoid thoughts that aliens are trying to make contact with him of all things that the production grinds to a halt and a plan B must be hastily devised.

Plan B is named Jiff (also Eddie Murphy), a nerdish but keen as mustard man who looks remarkably like Kit, enough at least to pass for him in glimpses and action scenes.
Bowfinger works because Steve Martin takes nothing too seriously, he expertly lampoons Hollywood’s ridiculous self infatuation and vacuousness (Robert Downey Jr has a brief role as a pompous producer).

But this is another example of just how funny Eddie Murphy really was in his prime, his dual roles as Jiff and Kit Ramsey are expertly played and quite frequently hilarious, a scene in which Jiff is asked to run across a busy freeway for an action sequence never fails to floor me, and the scenes that show Kit’s emotional and mental fragility are also excellent. This film should stand proudly alongside Coming To America as high water marks in comedic acting, a reminder of a time when playing multiple roles wasn’t merely a lazy excuse to ham it up and trade fart jokes.

Bowfinger isn’t as deep as Groundhog Day or perhaps quite as funny as Coming to America, but it is masterful comedy and remains highly rewatchable. In fact with Eddie Murphy’s career long since deceased aside from donkey dialogue it’s good to acknowledge the once-genius of Ed, and the excellence of Steve Martin.

Final Rating – 8.5 / 10. Bowfinger might not be the best comedy of all time, but it stands head and shoulders above anything passing for comedy over the last few years.

While I try to throw a joke or two into proceedings when I can all of the opinions presented in my reviews are genuine. I don't expect that all will agree with my thoughts at all times nor would it be any fun if you did, so don't be shy in telling me where you think I went wrong... and hopefully if you think I got it right for once. Don't be shy, half the fun is in the conversation after the movie.
View all posts by OGR →
This entry was posted in Eddie Murphy, Film, Great Movies, Movie Reviews, OGR Recommends, Worthwhile Movies. Bookmark the permalink.