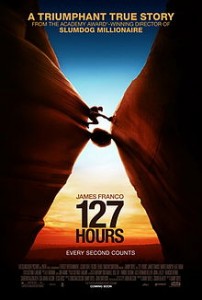 I resisted this film for so very long despite the Oscar nomination and critical plaudits, and in truth I sincerely wish that I hadn’t let my fragile will be tested by relenting to a recommendation and succumbing to my curiosity.

That’s not to say 127 Hours is a bad film – as the following few hundred words will attest. But waiting 90 plus minutes for a guy to sever his own arm is like an immaculately choreographed punch to your face, you don’t care how technically proficient it all is when the end result is painful to endure.

And if I just blew the ending for you then I’m sorry. Sorry that you haven’t watched the news in years.

Aron Ralston (James Franco) is a thrillseeker. An impetuous and bold do anything guy with a relentlessly positive attitude who records and captures everything that he does on film.

One fine day this Red Bull enthusiast leaves home in the early hours by car, driving to a remote desert location. Upon arriving he parks and takes out his mountain bike, a bike that he uses to venture even further into the remoteness and harsh environment. Aron then secures his bike and continues on foot across ever more rugged terrain, until he arrives at a point where even walking is impossible. No problem thinks Aron, and sets to an awkward crawling, climbing, scuttling combo to more over, through, under and around the massive rocky impediments.

To recap; Aron drives to a bike to a walk to a climb. Sounds like reverse evolution if you ask me. But Aron didn’t ask me. If he did he might be able to read a newspaper without requiring his knee or a table.

Then an unfortunate rock fall pins Aron’s arm in a narrow rock fissure in the middle of nowhere, far from bikes, cars and the Xbox that he might still be able to play had he stayed home in the first place. (Maybe he might be able to use the Kinect but I digress.)

We all know what Aron does. The title tells us how long he waits to do it. Everything that you think you might consider in such a situation happens. Everything and a lot more.

Ultimately you can think and try all you want, but no combination of paper and scissors is beating this particular rock. That is until Aron injects another participant into the equation; Rock, meet my friend Blunt Knife.

James Franco is excellent in a largely solo performance. Faced with the most unpalatable decision Aron Ralston somehow managed to perform the unthinkable.

127 Hours is a visceral, moving, powerful film. One that I will NEVER WATCH AGAIN.

Final Rating – 7 / 10. You might think twice before whinging about your next owee after watching this film.