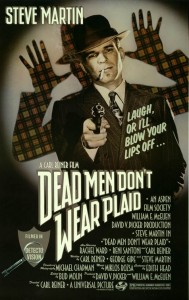 I’m afraid you’re gonna have to take my lips.

Even though this film uses nudge-nudge wink-wink references to the ‘Golden Age of cinema’ and features some of the bigger names of all time to a Gen X-er like myself it is the equivalent of putting my dad in front of the TV blaring American Idol and demanding he sing along. He won’t know any of the singers, nor any of the songs let alone the lyrics.

Ladies and Gentlemen under 50, I give you Dead Men don’t wear plaid.

The basic premise has Steve Martin and Rachel Ward playing a detective and daughter of a murdered VIP respectively, with every scene interspersed cleverly with clips and snippets of older, classic films featuring stars of the ilk of Humphrey Bogart, Cary Grant et al. (In reality they were the only two that I knew.)

The finished result has Martin interacting with real stars from other movies in a way that moves the narrative along. But alas while it might be clever and well made it doesn’t make it clever or interesting.

My main issue is that by casting Steve Martin – one of the funniest men on the planet then and now – I immediately started salivating at the hijinks he could get up to in the fake noir environment. Unfortunately his natural hammery and goofy reactions are handcuffed by the dry, dry, dry noir setting, where a bumbling fool would stand out like dog’s balls among the more dignified intercut extras.

Would’ve been funnier than this though. The film moves along at a snail’s pace while film aficionados grin inanely and point at long since deceased stars of yesteryear, immediately forgiving the film’s flaws in light of these welcome reminiscences.

Final Rating – 6 / 10. I found the film cleverer than funny, but in reality the shtick has been done many times before in skit shows and on film. I guess like most who watch classic films and don’t get it at all it is easier than to feign admiration than actual enjoyment.