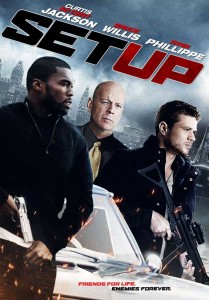 If you’re a no-name actor in an especially uncreative film the Missus whispering ‘Come home soon’ in your ear as you leave the house is essentially the kiss of death. So when Sonny (50 Cent) and Vincent (Ryan Phillippe) pick up long time buddy Dave to go off a-robbing the only thing we can be more certain of than the fact the casting agent should be shot – these guys are buddies? Really? – is that Dave is fucked.

Moments later the supposedly carefully planned heist actually involves little more than the ramming of a car in a packed intersection followed by bullets flying in all directions and lots of screaming. The fact that there was a casualty (unbelievably given the number of bullets!) brings discord in the ranks, discord that grows even clearer when the harsh reality of business over personal rears its ugly head.

Somehow the wash up of this amateurish high stakes job results in Sonny facing a mob boss named – and I am not shitting you here – Mr Biggs, played by Bruce Willis with a level of care that suggests he knew early on that no-one would ever see this spam. Biggs contemplates the ifs for a moment and decides that the sold out and left for dead Sonny owes him a favour, namely he must steal 2 million dollars from some grave digging Russians. That should square the ledger.

Wait… what the fuck!

Look against all the odds this 5th rate Reservoir Dogs imitation actually manages to get even worse, becoming still more convoluted and patently illogical at every turn. I should have guessed that when ‘Fiddy’ is the ‘hero’ and Ryan Phillippe was established as the ‘edgy star’ of proceedings that this project was doomed before it began.

The rest of the cast in this clumsy directed yawner are either inferior or irrelevant, Phillippe tries hard to seem cool and tough with his Timberlake Jr haircut and 50 Cent proves that his name isn’t the only thing short of a full dollar, and every scene involving zombified Bruce Willis is even more torturous. When Willis’ star was rising Hudson Hawk was panned for being misguided and clumsy, it’s a clear sign that the days of mega-stardom are long gone when no-one even bothers mentioning just how bad this film is.

Final Rating – 4.5 / 10. ‘Setup’ isn’t even a proper word, and it sure as hell isn’t anything vaguely resembling a proper film.

While I try to throw a joke or two into proceedings when I can all of the opinions presented in my reviews are genuine. I don't expect that all will agree with my thoughts at all times nor would it be any fun if you did, so don't be shy in telling me where you think I went wrong... and hopefully if you think I got it right for once. Don't be shy, half the fun is in the conversation after the movie.
View all posts by OGR →
This entry was posted in Bruce Willis, Crappy Movies, Film, Movie Reviews, The 7th Level of Suck. Bookmark the permalink.