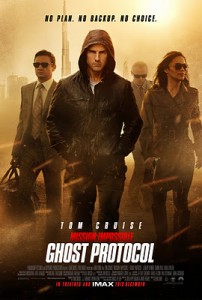 There are two reasons behind my ignorance of the Mission Impossible series. The first is that I am not a spy guy, I have seen I think two or three Bond films and sighed unexcitedly at each, and I rarely if ever track a film down if espionage and spy stuff seem core elements.

The second and more compelling reason is that I hate Tom Cruise with a passion. Since this hatred was kindled during Days of Thunder I think I have where possible avoided his movies aside from the following;

Interview with the Vampire: I read the book – liked it. Watched the movie – forgot it.

Magnolia: He was a bit player as an unlikable guy in an overrated film that I didn’t like.

Tropic Thunder: Please don’t get me started about the comedic value of a swearing, fat-suited, bald-cap, dancing Cruise. You’ll ruin my day.

So there you go. In the three years since I have been writing for this site I have revisited literally hundreds of films that I have previously enjoyed, and many that I haven’t but thought I might give another shot. The fact is that until now there was only one Tom Cruise film amid almost a thousand titles – and in my opinion he was the weak link in it.

But Mission Impossible: Ghost Protocol (hereafter MI4) intrigued me. I really wanted to see what visionary director Brad Bird could do with real actors and real action, I think Simon Pegg brightens everything he is in, and the film wore me down with review after glowing review. While this is sometimes a red herring I felt it worth at least a cursory glance.

The opening sequence which involves a daring precision co-ordinated prison break MI4 is frankly masterful. In a short action packed sequence it informs us that this will be a tightly edited, fast moving action extrapalooza.

For series laymen such as myself it introduces us to the team and tells us a little about them – thankfully without unnecessary dialogue or verbal exposition. Benji (Pegg) is the tech guru and provider of levity, Carter (Paula Patton) is eye candy and the voice of reason, and Ethan Hunt…

Ethan Hunt (Cruise) is the supremely confident, surfer haired, personal trained, Space Fairy worshipping lead douche of the team known as the Impossible Mission Force, or IMF for fans of brevity. Though to be fair for the most part he keeps the freakishly big choppers behind pursed lips and saves the twinkling eyes until the very last sequence.

He is actually practically normal, almost like a real person in this film.

With no time to waste the film segues effortlessly into the team’s new mission, which entails busting into the Kremlin to rescue priceless information which could prove disastrous in the wrong hands. Brad Bird shows that he learnt a lot making The Incredibles, and that it translates well into live action. Unfortunately for the IMF this particular mission does not go so well, and ends with a big explosion. As the debris clears the IMF find themselves carrying the blame for many deaths, hunted by multiple governments, leaderless, friendless and without all the toys and gadgets that are ordinarily at their disposal.

If this isn’t all bad enough the afore-mentioned priceless information has indeed fallen into the wrong hands, so it is up to Ethan and co to save the day.

Despite a two plus hour running time MI4 is basically a series of action set-pieces that are separated only by brief scenes that reinforce just how cool the team is.

Through various locations criss-crossing the globe Ethan must outwit, outrun and outgun his opponents using immaculate timing and good old fashioned teamwork. While the film can’t maintain the pace of the first hour it was refreshing at times to see examples of non-CGI assisted stuntwork and the cool gadgets and techy-toys that the spy world seems to demand – most of which seem to be made by Apple.

The supporting cast is pretty top notch really, Jeremy Renner joins the team along the way as Brandt, a kind of Ethan apprentice being groomed for the top job. Simon Pegg cracks all the jokes which (mostly) stay on the non-cheesy side and Paula Patton isn’t just the cleavage rocking pretty girl, though when duty demands that she bring out the big guns the results are indeed impressive.

I could have done without the ‘magic suit’ sequence which was clearly a callback to the ‘suspended Tom’ from the first film (even though I haven’t seen the film that image is everywhere) but seemed a reach here. In fact the only scene that was harder to swallow was a sequence in which Hunt and Carter must traverse a crowded cityscape in a souped up car (all cars supplied by BMW!) with Carter barking directions as Hunt drives hell for leather. I mean come on! A woman reading a map and Tom Cruise seeing over the dashboard!?!

I quite enjoyed MI4 despite my initial reservations. Funnily enough though I came away satisfied but not at all determined to track down the previous three films.

I now desperately look forward to what Brad Bird decides to do next. If he can entertain me in a spy film starring Tom Cruise, then imagine what he might do in a genre that I actually like and a vaguely likable lead!

Final Rating – 8 / 10. A very entertaining action packed blockbuster for a mainstream audience. Normally they and I don’t get along, so MI4 leaves me pleasantly surprised.