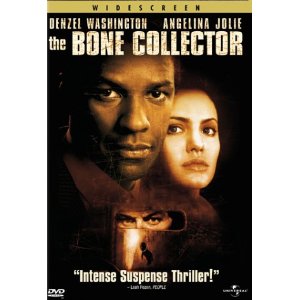 Only time he’s vertical in the film.

There are a lot of books about serial killers, and a lot of films based upon them.

The effectiveness of films like The Bone Collector is measured in something I have dubbed gaspability. If you are easily surprised or amazed by stuff then this is the film for you (my wife is a prime example, when Doogie Howser popped up in The Muppets as a cameo she let out a yelp of realisation that woke our sleeping dogs).

If, like me, it takes a little more than a celeb cameo or clumsy twist to widen your eyes then these films are merely a waiting game, a series of distractions before the guy behind the shenanigans is revealed.

Only then can I give me verdict on the film.

Where The Bone Collector is concerned, I had two responses, the first I can’t divulge, the second was ‘why sacrifice a 90 minute build up for a 5 minute hack ‘n’ slash?’

For me these films are all about the ending, unfortunately the last 5 minutes of this film were the weakest.

Lincoln Rhyme (Denzel Washington) was the duck’s nuts of police investigators, until a falling chunk of debris rendered him immobile but for his right pointy finger. His brain was still fully functional though, and his expertise and insight into seeing past the clues all the way to the facts is still very much sought after.

Amelia (Angelina Jolie) has two fully functional legs, as she proved at this year’s Academy Awards. Amelia is a beat cop, serious, driven and headstrong.

When Amelia happens upon a crime scene her quick thinking and instincts uncover something more sinister than a mere dumped body. A discussion with Lincoln convinces him also, and together they come to the realisation that there is another potential victim to be located.

Amelia then acts as the John McLane to Lincoln’s bed-ridden Al, liaising by radio from afar as she navigates the crime scenes – as in plural – yep no-one is labelled a serial killer after one act, it takes time patience and planning to grab the title.

With Lincoln’s apartment hastily turned into mission control, it becomes both the hub of operations and the place to cycle through distractions and red herrings in the form of half the character actors of the 90s. All the while Jolie puckers her giant fish lips and tries to act more ‘New York’, and Queen Latifah portrays Lincoln’s loyal, headstrong carer to remind one and all that the brains behind the operation is less mobile and more vulnerable than a bag of potato chips.

The cold hard fact of the matter is that there is precious little tension built through the film, and as mentioned before any semblance of care is thrown out the window in favour of a tacky sensationalist finale that renders the first 90 minutes pointless.

Final Rating – 6.5 / 10. I’m happy for all the people that derive pleasure from films such as these, I am just not one of them.