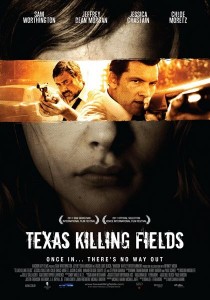 Takes 'shooting daggers with her eyes' to a whole 'nother level.

Perhaps the most adventurous aspect of this film is the title, but even that is a fairly bland descriptor, and indicative of what follows in this generic and all too familiar two hours.

Mike (Sam Worthington) and Brian (Jeffrey Dean Morgan) are two cops on the trail of a killer who is abducting young women and leaving their mutilated and bloodied remains in the dangerous wetlands outside of the township – hence the title. The so called ‘civilised area’ is hardly high society though, filled with itinerant labourers, unemployed trouble makers and low income earners, and the people who rely on them for their incomes, namely prostitutes and drug dealers and the like.

It is a tight knit community beset with social issues caused by alcohol and domestic violence, where the cops are unwelcome intruders and nobody ever saw nuthin’…  The mood of the town is oppressive, the backdrop nice and grimy and the locals on edge due to the frequency of disappearances.

Unfortunately for the film Mike and Brian encounter precious few red herrings and massive twists in the investigation, which is straightforward to the point of dullness, even moreso than the dozen cop TV shows that it reminded me of (that I don’t watch either). The only friction is caused by Brian being originally from New York, and therefore is viewed as an unknowing outsider to the locals – including Mike – and the fact that Mike’s ex-wife is the local CSI.

Worthington gets the chance to try out a new Texas accent and for the most part does a serviceable job, aside from a couple scenes where he gets aggressive or yells and the accent evaporates quickly, Jeffrey Dean Morgan hardly raises a sweat for his scenes and Chloe Moretz is similarly under utilised in a role as the vulnerable young daughter of the town ‘ho’.

The story itself is jaded and depressing, and it is told in similar fashion. Even with twists and turns this might still be bland stuff, as is it is merely a training film for a newbie director, and a paycheque for a cast that is better than the material.

After scanning my notes I realised that TKF is just another ‘Not’ film, as scrawled on my page were brief snippets including ‘not very gory’, ‘not action packed’, and ‘not good – not bad’. I could have easily included ‘not gripping’ and ‘not really necessary’.