Interview with the Vampire: The Vampire Chronicles (Review) 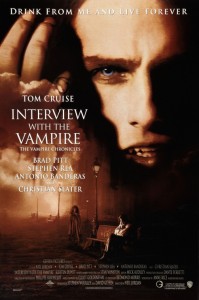 Interview with the Vampire is a visual marvel, with spectacular production values, immaculate costuming and sets and incredible attention to detail. It also boasts a pale skinned, glassy eyed and lustrously tressed cast including Tom Cruise, Brad Pitt and Antonio Banderas.

It would make a wonderful and eye catching painting. Unfortunately it moves about as fast as a painting, and who would sit patiently in front of a painting for over two hours?

Nonetheless that’s what happens here, it’s a beautiful pretentious film with a plot that oozes along like an ant on a banister trapped in treacle.

When amateur reporter Daniel (Christian Slater) randomly picks Louis (Brad Pitt) for one of his ‘interesting people on the street’ interviews it would seems that he lucks out. After all being a 224 year old vampire who has travelled the world enjoying the finer things in life would seem an inspired choice…

The story begins with a young man in 1700s New Orleans wish a death wish and great hair – who is instead turned into the bloodthirsty yet amazingly well heeled undead, and spans a full two centuries across many continents, all the way up until he meets the guy from Pump up the Volume in an alley and agrees to a chat.

Who would have thought that Louis’ tale spanning the last two centuries would make you feel like you were there for; Every. Last. One?

The man that ‘turns’ Louis is Lestat (Tom Cruise), a well to do dandy who mingles freely with high society and after centuries of routine has a carefully planned dietary schedule; he starts the day with a young woman, then snacks on a young man, before… You get the picture. Lestat takes Louis under his wing and teaches him the strange and eccentric ways of scientology vampirism. Like many young men Louis likes the burger (blood) but doesn’t want to kill the cow (people), so he dines on rats, chickens and dog’s blood for a long while. But vamps can’t live in pets alone…

The pair maintain their odd coupling for years like a mismatched marriage – albeit with more blood drinking than most – with Lestat playing the role of the boorish and arrogant husband and Louis the whiny and ever doubting wife. And like many doomed marriages the husband decides that maybe a kid will solve the problem rather than add to it.

The ‘kid’ is a freshly orphaned young girl named Shelley (Kirsten Dunst) that Louis ‘saves’ from the plague by draining her blood, and Lestat promptly converts her into a creature of the night. Or gives the ‘dark gift’ to. Or ‘blesses with goof juice’. Or whatever flowery tripe Anne Rice wrote.

Of course like in real life it is the child that initially helps but ultimately dooms the relationship. Once the pleasant novelty of having a precocious and adorable tyke gives way to a demanding and ever questioning young bad tempered brat, the realisation is all the more serious when Louis and Lestat realise that they will have this kid for more than the usual 18 or so years, but forever.

And so it goes year after year. Lestat is an overblown dramatic git, Louis a sad wuss and Shelley a bratty little bitch.

When the ‘action’ moves to Paris they discover the only possible type of vampire even more annoying and irritating than the trio – a vampire mime (!) who is but one of an avant garde group of fanged beasties who both entertain and dine on Paris’ elite and upper crust.

Gee I just wish the film was longer…

For the record I like Anne Rice’s books and read a few of them as a teen. But while it is perfectly fine for a novel to move at a languid pace and unfold over hundreds of pages a film is generally more immediate, and listening to the unlikable characters crap on for hours is like ornately manicured nails being dragged down an expensive chalkboard, the materials are fine but the experience is still excruciating.

Final Rating – 5.5 / 10. Consider this proof that not every interesting book can translate into a good film. I know this was back in the day when vampires weren’t as ‘big ticket’ as they are now and sell out as fast as the latest iPhones. But here is a vampire film that surely could have used a few more sparkles…