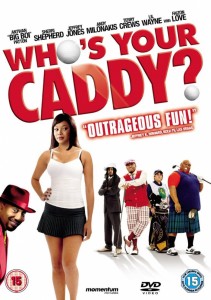 In truth neither outrageous nor fun…

Phew, a couple days ago I watched Don’t be a Menace to Society while drinking your Juice in the Hood, and I thought that was perhaps the laziest attempt at so-called comedy through racial stereotyping.

Thanks Who’s your Caddy for setting me straight. This atrocity could set race relations back far more than the rise of the Ku Klux Klan *ahem* Tea Party, with lazier writing than a schoolboy finishing his homework before being allowed outside, and so many reprehensible characters that you literally have no-one to root for.

Rich black rappers want the respect of rich white guys who dominate the membership of an exclusive golf club.

Rappers want in. Old crusty white guys want them out.

On the surface I can see it would be easy to side with the rappers, you know, all that equality and stuff. But these guys are loathsome dipshits from day one, showing no respect to anyone and acting like boorish dicks. I am no upper crust snob but I wouldn’t want these morons in my club. But considering no club will have me in any case, so I guess that’s irrelevant.

And also; why apply to a club you don’t even want to get into? (They do try to give a reason, but that sloppy cheese is actually worse than the attempts at humour.)

And of course the rich white guys need no introduction, they’ve been in every second film for a hundred years, with Caddyshack, Trading Places, The Distinguished Gentleman and How High to name but a few. They love the status quo, hate anything non-white. Usual stuff.

And as if we thought it couldn’t get any worse, they lazily toss in a few more doozies including – but not limited to – gay and little people stereotypes and fart jokes. As in plural. As in many more than one.

Big Boi stars as C Note and proves two things. That he is an excellent rapper. And that Samuel L Jackson was partially right when he lamented all the talentless rappers stealing jobs from black actors. Big Boi is talented, but his talent is not acting.

In a film filled with more reprehensible characters than an entire evening of reality shows poor old Terry Crewes gets a special award for being mostly amusing in his unfortunately short lives screen time, especially when he had to pretend that he was all hot and heavy for the moronic Sherri Shepherd.

But ultimately I have to ask who possibly could have thought this was a good idea? I mean the presence of Big Boi might guarantee some of his fans watch this dross – it’s the only reason I bothered with it – but the utter lousiness of the film would be more likely  to result in less Outkast fans, not more Who’s your Caddy? converts.

Final Rating – 3.5 / 10. This film shows two very different parties with one thing in common, I wouldn’t want to be a member of either of their clubs.

P.S. It shouldn’t need to be said but you bet your sweet ass that old crusty white people get down and dirty to some dirty South hip-hop in this film. And don’t they look uncomfortable doing it. If you’re the one person that still laughs at this. Stop.