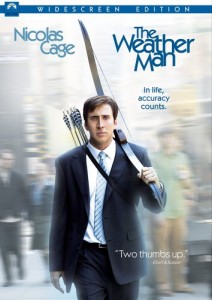 A film is made.

It is technically proficient, adeptly acted and for the most part logically plotted. On the other hand it is often deliberately awkward to watch, is populated by characters that range from purposefully dull and annoying all the way to obnoxious, and it teaches you nothing. If anything this is a film that it seems wants you to leave depressed.

The Weather Man achieves this aim. So can it still be called ‘entertainment’?

Director Gore Verbinski has previously mastered commercial horror with The Ring, he has made way more commercial adventure comedy with the Pirates of the Caribbean films, and since this has mastered animated comedy with Rango. I find it hard to believe that he could be so confused or so inept that he made a film without a purpose or reason, so I must assume he meant The Weather Man to turn out this way.

Dave Spritzel (Nicolas Cage) is a weather man whose life seems to be crashing around him.

He is divorced with an ex-wife (Hope Davis) who has moved on to another man and two teen-ish kids, overweight rebel without a clue Shelley and son Mike, who is being paid a little too much attention by his male guidance counsellor for comfort.

On top of all this Dave’s father is the famous and much loved novelist Robert Spritzel (Michael Caine), who while a caring man seems to second guess practically every career and parenting decision his adult son makes. Oh and Robert is dying…

Dave feels that his family is broken but fixable, and he worries that his minor celebrity status as a TV weather man is unearned and his income undeserved. Plus he’s the target for flying fast food thrown from passing cars.

There are numerous running subplots and arcs involving all of the above and a possible Big Promotion that Dave desperately wants along the film’s excruciating two hours, but ultimately precious little that actually leads anywhere. It seems no-one learns much and no-one really grows through the film, so I can’t pretend to begin to tell you about any messages. There aren’t any.

The acting is fine, Cage refrains from his usual histrionics and Caine is dignified as dad Robert, the kids are well cast and the ex-wife suitably frustrated and exhausted by all the goings on – none of which are interesting mind you.

Hang on, I forgot to tell you one last thing; at one point Dave picks up archery as a hobby and starts walking the city streets with a bow and arrow. You finally think hey this is going somewhere.

Final Rating – 6 / 10. It’s 100 minutes of well made forgettable-ness. If this DVD fell off the shelf and no-one was around to hear or see it, it wouldn’t matter one bit.