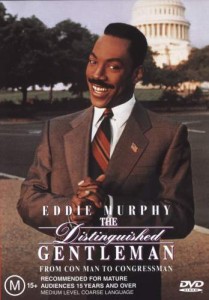 What is the difference between a small time con-man and a politician?

Trick question. They’re the same! (Unless you want to argue that the politician isn’t small time I guess.)

Anyway hilarious rib-ticklers aside… When local hustler Jeff Johnson capitalizes on a naming similarity and vaults into the US Senate, he immediately sets about reaching towards all the well manicured hands holding out money and favours.

Seeing a handsome and well spoken black man gives party high-ups ideas, they latch onto Johnson and give him simple instructions “Shut up and smile big”.

This works well initially when Johnson amazingly is fast tracked through to positions others in parliament wait years for, but then things change for Johnson…

As the DVD cover might say Johnson comes into contact with a well meaning and determined young woman named Celia, who catches both his eye and his heart. Celia introduces Johnson to some of the more ‘real-life’ situations that are all too often ignored by politicians seduced by big business and big budgets.

Will Johnson himself learn to grow a heart when all around him are heartless, or will he simply become another greedy unfeeling politician?

This was the early 90s and was obviously a project lying in a studio drawer waiting for a big star to sign on and green light it. If it were Stallone they would have played off the ‘big dumb guy with muscles’ angle, Bruce Willis would have smirked his way through proceedings and a bunch of peripheral actors would have seen it vanish from shelves and cinemas within weeks.

But they got Ed near the height of his powers, as well as his smile and laugh Murphy gets to unleash his array of voices and characters to provide a few decent chuckles, and it must be said that the supporting cast are all pretty reasonable in a paint by numbers affair.

Final Rating – 6 / 10. The Distinguished Gentleman is hardly necessary and is as light as a supermodel, but it is a likable flick with a laugh or two and a half-hearted political lampoon that breezes over severe corruption and how empty campaign promises are.