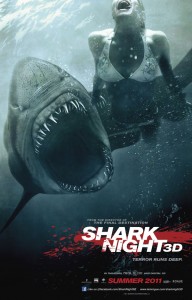 Shark Night never harboured aspirations of being Jaws 2011, which is a good thing, as any film that does is doomed to failure and backlash from a film community still content with the first one.

But I didn’t want Jaws 2011, I wanted a silly, gory, ridiculous flick with nature finally getting its own back on humanity for 90 minutes or so. Unfortunately the most joy I felt last night was walking up to the counter and exclaiming ‘Two for Shark Night please’, because everything after was at best bland and often atrocious.

Shark Night is deliberately shlocky and low budget, and features a cast of nobodies and the most familiar of horror movie settings: 7 college kids head off for a weekend of booze, parties and ‘fraternising’, then things go awry. That too doesn’t need to be a bad thing, in fact many of those factors can be pluses if handled correctly. The last two decades have given us Anaconda, Deep Blue Sea and last year’s Piranha 3, none of them great films, but all memorable and worthy of discussion when ‘animal attack’ movies come up.

All we as a movie-going public want is a decent menacing creature, some inventive kills, a few chuckles and – if there’s time – some nubile young skin. We don’t care if the stars of the movie are dodgy fake looking CGI and equally dodgy fake looking boobies, we want our 80 minutes of eating popcorn and laughing guilt free at things that would be horrible if they happened in real life.

Unfortunately Shark Night either forgot or decided to ignore the rules half way in. This is not a Piranha type fun gore ‘n’ skin flick, this is something else altogether, something that will be forgotten in 12 months.

From memory the first half of the film goes just like this:

I might have mixed a chomp and bikini somewhere but you get the gist, the film is set up for some mindless fun, where sharks can not only keep pace with speedboats hurtling along at full tilt but they can actually get alongside and ram them. Where at one point a bikini clad lass is trapped underwater for so long that you must start to wonder if her brain cells might start dying through lack of oxygen, before you swiftly realize that with these kids that wasn’t a big problem…

Unfortunately shortly after they ‘meet the locals’ a second time the film takes an unwelcome turn, because in this case the locals I refer to aren’t actually the sharks but real, walkin’ (sorta) talkin’ redneck locals. Perhaps most troublingly locals who google.

Let me be perfectly straightforward, the film was hardly creative to this point, but the sudden dip in quality from this point on is simply breathtaking.

I won’t ‘spoil’ this film  (the scriptwriter and filmmakers did that already) but what was threatening to turn out to be big dumb fun quickly lost any rights to the use of the word ‘fun’, and we know what that leaves…

Might I finish by simply saying if you have a film with a bunch of hot chicks drinking and cavorting, surely there is a better justification for near nudity than implied rape? When ‘fun’ turns to ‘mean’ in the blink of an eye, it’s time to go home. Or if you haven’t seen Shark Night, perhaps stay there, this crap won’t make you happy you went out.

Final Rating – 4 / 10. Sharks have bad enough reputation without being associated with films like this.