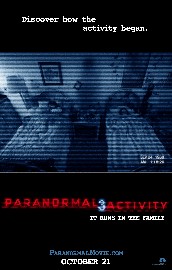 The Paranormal Activity franchise represents the first trilogy of films that have been released to theatres since this website started. More impressive though is that for three separate films all mining the same territory released so closely they are all actually pretty
good, as long as you don’t watch them back to back and realise how samey they are

The first Paranormal Activity dealt with young couple Katie and Micah and the strange goings on in their home.

Paranormal Activity 2 was set slightly earlier than the original film, and introduced us to Katie’s sister Kristi and her family – including a young baby and the family dog – it dovetailed in to the events of the first film quite neatly at the end in a twist that was either
lazy or semi-inspired depending on your perspective. I quite liked it.

This installment of America’s Scariest Home Videos takes things back even further, in fact some two decades earlier circa 1988 where Katie and Kristi are mere young and innocent girls with an ‘imaginary friend’ named Toby…

It also shows us that the obsessive video taping bug might in fact be (tangentially) genetic, as the found tapes were made by the girl’s photographer stepdad (I know it is usually the girl’s partners that made the tapes).

Of course the thing pretty much writes itself from here, but I must admit that I liked the fact that they tried to tie the films together with an explanation – even if it was similar to those from other films.

The one new and ingenious inclusion is a fan mounted oscillating camera which spans the kitchen and living area. Each ‘pan’ takes perhaps 12 seconds, long enough that your imagination does most of the work for the filmmakers which leads to a few tense waits where you know something must be coming soon.

Which leads me to the strength of these movies; while things need to happen to justify labeling the film a ‘horror’ movie, the scenes that are scariest are the ones in which nothing is happening. Once things happen they are usually accompanied by a loud noise and/or scream, you inhale quickly and move on, but those lengthy nothing’s happening moments are often excruciating in a good way.

There are a lot of those moments in these films, and despite myself I quite enjoyed being scared by the same things yet again. In fact Paranormal Activity 3 might well be the best in the series, but good things must end, and I feel that we’re done here.

(Box Office records say differently though, and the numbers reported for this film practically guarantee that we’ll be lining up for PA4 next Halloween.)

Final Rating – 7 / 10. Sure it’s predictable and a replica of the other two, but whatever you think the night after is irrelevant, while you’re watching it this is tense and often scary stuff (without the gore seemingly demanded by lazy horror-makers). Isn’t that what a horror film is supposed to be?