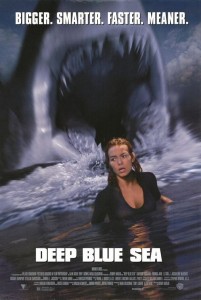 Ummm, better you don’t look behind you.

How could boosting the size and aggressiveness of massive genetically engineered sharks ever backfire? That’s the type of deep philosophical question posed by the thinking man’s Deep Blue Sea.

It also has a parrot that constantly utters PG swear-squarks.

Let’s not mess around, of course the huge scientifically-assisted sharks go rogue and start tearing up the remote offshore research facility named Aquatica. It’s more a matter of who they kill, and that really plays to Deep Blue Sea’s (limited) strength, the cast.

Aside from a large woman manning the radios whose role is basically to keep telling the staff (and us) that a big storm is coming, everyone else in the cast is in a similar boat (so to speak). Aside from Samuel L Jackson – and let’s face it he was in every second movie made in the 90s anyway – everyone else is familiar yet largely unknown.

If you had a look at a photo of the main cast you’d say “Gee I know that guy/gal from somewhere” at least 5 times. So when the shark hits the fan you’re never sure who’ll go first and how, which is really the only tension or uncertainty in these films anyway.

The giant super-sharks are apparently 45 feet long but their size seems to vary to suit the situation, meaning at one point they can be attacking a stove door without success, the next they can be destroying a major door between passages with no trouble.

Deep Blue Sea has one cool CGI assisted bit, it provides a momentary shock thanks to it being so unexpected, then it is over and we must put up with another 40 minutes of narrow escapes, holding one’s breath underwater and moving through passages to escape from animals that are generally seen next to small piles of chips. Only these ones are the size of a caravan. 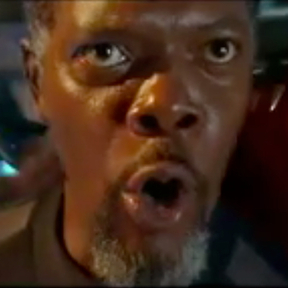 Near the conclusion of the film we are asked to believe that everything occurring to that point was deliberately set in motion by three large fish. This includes several acts with unexpected consequences, occurring in a facility that the sharks couldn’t possibly have seen nor expected to understand. In fact the series of events was so coincidental and unlikely that I can’t imagine the screenwriter coming up with it in less than a few months.

This means only one thing. Either the whole thing is a crock of shit OR the sharks had help on the inside… Now I’ve wracked my brain as to who might have betrayed human secrets to the underwater menace about the facilities’ weaknesses and structural deficiencies with no luck, and it couldn’t possibly have been a crock of Hollywood shit lazily pitched and fed to the mindless masses that attend these films each year – myself included – could it?

Should it be a concern that in a film set in a scientific facility with numerous scientists and scads of high tech lab equipment that the three smartest things in the film are fish? I vote yes.