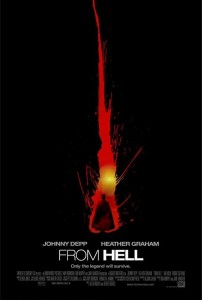 Poster cooler than the film yet again.

So let’s get this straight, the African-American directing team the Hughes Brothers, fresh off a hot streak including Menace II Society and Dead Presidents decide that their follow up would be an English period dramatic thriller?

Well yes it was folks, and to prepare for making their Jack the Ripper flick they watched Bram Stoker’s Dracula about a million times, and ripped off almost everything but the plot.

There is much poetic license taken here, apparently it is based upon a fictionalised comic book version that I have never heard of, but then realistically I haven’t heard about any comic that hasn’t already been made into a movie.

What I like is that it opens with a quote from good ole Jack himself, considering no-one knows who he is that seems a huge leap of faith.

So to summarise The Hughes Brothers’ version, Jack is not a random hack’n’slash guy roaming the back streets, but a calculated intelligent and skilled surgeon hell-bent on killing specific targets. In this case a sextet of hookers led by Mary Kelly, played by Heather Graham, yup good ‘ole Rollergirl herself.

Now I’ve heard that Heather absolutely butchers the English accent in this, but as I am not especially familiar with the particulars of the dialect I can’t be sure. As an Australian I can definately tell when someone is massacring the Oz accent, so I guess the best people to ask would be British locals.

Now these hookers owe some seedy guys from the Nicholls Street gang some cash, and more than 6 scrags can make in reasonable time at their trade. The boss of the gang McQueen is hanging around in menacing fashion, basically providing a nice red herring suspect for the early stages. This is sorta the first 10 minutes of the flick, and is real confusing, especially if you aren’t paying attention, but in reality it matters not a zack, as aside from showing that the hookers are buddies it means nothing.

Shortly after we have the first kill, one of the hookers is found minus some vital lady bits and a fair bit of blood. So we finally get to meet Johnny Depp as Inspector Abaline, and his Sergeant played by Robbie Coltrane.

Now a digression: I should hate Johnny Depp, he is pretty, bangs supermodels, is rich, and was famous and cocky when very young. I should hate and boycott Johnny Depp movies just like I hate Tom Cruise, Richard Gere and Hugh Grant.

Why? I tried to find out why by looking at his imdb page, and what I came up with was that over his whole career he has never once made a film that ws obviously just for the cash. Now you might say “what about Pirates?”, and maybe it was a cash grab, but the fact was prior to the first flick there was never even the hint of the blockbuster trilogy it would become. Beside this he has latched on to Tim Burton, one of the most consistently interesting directors over the last 20 odd years, which means every few years he will have a film released that I will likely see.

Back to Hell. Aberline is a little bit of an opium addict, and dabbles with other nasties too, so much so that he has visions of what is likely to happen in the future regarding the hookers. Now I drink, often to excess, and even though I am not fortunate enough to have visions (if anything I lose memories I already have) I would think it extremely fortunate to have visions of people I have never met, but will soon.

Kill # 3 down, 3 to go. Turns out that the hookers, being poor and unfortunate, cannot afford good things like fruit, so they are lured to their doom with the temptation of grapes. This works apparently on almost every occasion, so it is obvious too that they are poor, unfortunate…. and stupid.

So Aberline, working on a hunch, goes to meet some noted surgeons in the hope that they could enlighten his theory that an educated and trained man is doing the killing futher. There he meets Bilbo Baggins, I mean the Royal surgeon and physician Dr Gull, who confirms and supports his theory.

Without delving further and giving away too much there is a kep subplot which eventually somewhat clumsily becomes intertwined with the key story, there are cover ups, secret orders and societies, red herrings and short-term suspects and corruption at the highest level. Basically everything a grown boy needs.

Ultimately the film unmasks the “real” killer, or at least this version’s killer, and while it is at least ballsy that they decide to name one guy and come up with a motive and backstory, it does feel very much like a flimsy attempt at a plausible story. There must have been hundreds of leaps of faith taken to piece the thing together from scratch, and if one or two of those aren’t in fact true which is likely the case the whole house of cards falls.

But did I like it? Not really, it was OK and vaguely interesting from start to finish, but I never really cared who lived or died, and even now only 24 hours later I can’t come up with a single notable or especially memorable scene
over the whole 2 odd hours.

That I watched Bram Stoker’s Dracula a few months back, and I tell ya From Hell has so many similarities in feel, tone and vision that if you watched them back to back you might think they were part of a series.

Seriously, that’s all I can remember, is someone asks me next week I’ll say: “It reminds me of Bram Stoker’s Dracula.”

Final Rating – 6 / 10. If made up versions of historical events are your bag, check this out. Just don’t expect too much in the way of action, humour or entertainment.