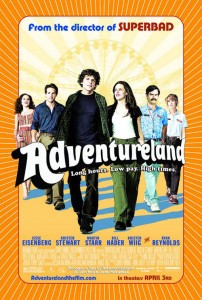 Most misleading poster in years. Absolutely NOT a party movie.

This was NUTHIN! like I expected going in, but that is a good thing. For some perspective I had this as a Superbad crossed with American Pie in my mind, only I expected it to be far more Pie influenced, which is why I waited this long to watch it.

Not only is Adventureland set in the late 80s, I felt that it was heavily influenced by the films of the era, with only a (slightly) hipper John Hughes feel at times. This refreshingly means that there are precious few vomit jokes or body fluid gags. Sure bodily fluids are exchanged and people vomit, but unlike hundreds of films in recent years this isn’t the joke.

Set in 87, we meet James as he is being unceremoniously by his short term girlfriend as the end of the school year comes. Thereafter he finds that due to a change in his Dad’s employment status he can no longer afford his end of year trip to Europe, and worse his college aspirations are hurt by the financial difficulty. Soooooo, James looks for a summer job and without too much delay finds out that the local amusement park Adventureland is the only place that will hire him. As mentioned above there are no “look how funny these situations are!” montages featuring quirky employers and shitty jobs. There is one guy who says “we’ll get back to you” and then James announcing to his parents that Adventureland is the only place that will have him. In this Deuce Bigalow age this is refreshing.

In the initial handing over of the park rules James is told that no-one gets anything for free, no-one wins the big prizes and is then shown how everything is rigged, and here is me thinking that carnival folk are all honest as the day is long! An aside here: Kristin Wiig plays the wife of the park manager (Bill Heder), her under her breath comments after the end of the previous character’s comments was amusing in Knocked Up and Saturday Night Live. Kristin, it’s done. Please stop. If you don’t have anything else to do go home and count your money.

The downside of having a smart plot and a fairly intelligent and realistic cast is that the dialogue here isn’t always true to label. This means that instead of bum and dick jokes we have witty and insightful comments that sound a bit foreign coming from spotty teens, even though because this is a movie there are no spotty teens. I don’t mind one character quoting famous authors or latin, but when it seems that everyone is doing it it just seems a little strange.

But I digress, the main characters in Adventureland are James, a Michael Cera clone, (though I think not by choice), and Em the lurrrve interest, both are minimally played without any histrionics or theatrics, again this is a good thing. To spice things up there is the resident hottie chick who every guy covets in Lisa P, and the older cool maintenance guy Connell. Now Connell is played by Ryan Reynolds, who I detest, although this is how memorable I found him, I actually thought he was Dane Cook through the whole movie until the credits rolled and there he was. I hate Dane Cook too by the way.

Most of the staff are in their teens, which is fine but they are always in pubs, drinking and smoking, not that I am prudish, it’s just that I’m sure the legal age is 21 in the US and they never seem to hide anything.

To sum up Adventureland is a teen movie unlike many teen movies made for a while, there is no cheesy moments, it is slow and deliberately paced and everyone in it thinks about what they say before they say or do it.

Strangely enough even though I would rather watch this a million times than sit through American Pie or Road Trip once, I think the level of the dialogue is more accurate in those crappy films, as in my experience being a teen and since then dealing with them, they rarely discuss Melville or underrated Russian authors.

Now I think I have suggested that this is not an “event” film, so there isn’t much in the way of major plot developments aside from relationship and family issues, which are more easy to appreciate if they aren’t listed here.

I’m sure that the primary issue faced by the filmmakers and bean counters is that with the target market being teens, would they embrace a clever and intelligent film without explosions and tits?

In looking for the answer to my query I found out that the director of Adventureland also made Superbad, so I like the way he is heading with his career. Hopefully from here he doesn’t take the Nicholas Cage Con Air route in future years cashing the easy cash.

Final Rating – 7.5 / 10. Intelligent, well paced and dare I say it sweet? I am a long way from my teens but in my old eyes this is what a good teen movie looks like.