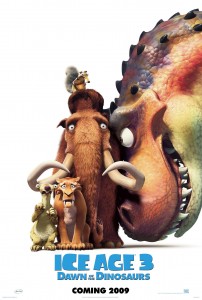 Before we start, yes I have seen the first two, and I liked them both to varying degrees, especially the first one.

Ice Age was great. I’ll go into this much more further on but John Leguizamo single-handedly hosts a class in voice acting as Sid, and the plot was basic but served the film well.

Ice Age 2 – The Meltdown, fell for the sequel trap of thinking it needed to introduce new characters (and a love interest!) to keep things fresh. It was a little too cute at times but did the job and didn’t let the team down too much.

Ice Age 3 – Dawn of the Dinosaurs, does in fact let the team down. This is not quite the Rocky 5 or Alien: Resurrection of sequels, but it is a noticeable step down in quality even from number 2.

Once you understand that all Ice Age movies are about 60 minutes of movie padded by Scrat skits, simply there to be a kiddie friendly time consuming distractions, you’ll be fine. When all three movies have the same basic plot device, the characters must move with urgency from one point to another, it is hard to justify much more time.

Ice Age has the baby get lost and Manny, Diego and Sid have to get him back to the family, Meltdown has the characters fleeing melted ice caps to higher ground, and Dawn of the Dinosaurs has them trying to find and regain Sid.

While I am here let’s get to the plot, Sid goes missing to the Land of the Lost where dinosaurs still roam, and Manny, Deigo and the now extended herd must find him. Manny and Ellie are also expecting, which reeks of desperation and reminds me a hell of a lot of Shrek 3, which su-ucked (so did 2 but moving on).

There are some very minor subplots early on, Diego wants to move on and leave the herd, Sid wants to start a family and Manny is concerned about being the “perfect” dad. I wrote notes about them but now having seen the whole film I realise that the first 20 minutes are totally irrelevant to the remainder of the film, aside from being conveniently solved all at once by the events of the finale.

I can’t name a single Johnny Legz film that I even like, not one. But when he puts on the lisp I think he is perhaps the greatest animated character that I can come up with, his only rival being Woody from Toy Story. I recently caught some blatant promos masquerading as featurettes for Madagascar 2, where Chris Rock, Ben Stiller, Jada Pinkett-Smith and David Schwimmer gave the weakest performances of their respective careers trying to justify the shitty sequel by giving almost every reason beside “I did it for the cash, come on I taped my bit in two hours, didn’t shave and I was wearing trackie dacks the whole time”, which most certainly WAS the reason. Seriously, watch the movie and tell me one thing that any of them did that resembled acting. Sacha Baron Cohen acted. Shit, even Will.I.Am acted, albeit badly. Chris, Ben, David and Jada talked and the animators synched their speech to the cartoon animals.

Johnny Legz created a character, a pattern of speech, mannerisms and a unique voice for Sid, and he obviously cares for the character. When Steve Martin reads a shopping list, I’ll laugh. If Bill Murray recites poetry, I’d probably crack up. And when Sid says almost anything I am at least amused. Counterpoint this with Ray Romano as Manny the Mammoth, in the first Ray played Manny as grumpy-Ray-Romano, in the second film he played Manny as slightly-grumpy-Ray-Romano, now in the third he plays Manny as talking-to-a-toddler-Ray-Romano. By that I mean almost every line is given with a half whisper that encouragingly finishes with an upward tilt. “how are yoU GOING BUDDY?” Maybe gettin’ a little calms you down a little.

So I liked Sid.

What else? So why are they in The Land of the Lost? Sid is envious of Manny and wants to start a family, so he finds some random eggs and tries to hatch them, only dun-dun-dun-duuuunnnnnn! they belong to a T-Rex, who tracks him down and takes him away to her home. Why she laid the eggs miles away from her home is never explained, but then again neither was where Bugs Bunny found that lady Bunny makeup and outfits so quickly when he tried to hide from Elmer Fudd.

What happens after they get to The Land of the Lost? Well I can’t say much, but they meet Buck, a mercenary weasel played by Simon Pegg in an unnecessary supposed-to-be-comic-relief role. Also need I mention that:

– Sid was lost.
– Ellie was pregnant.
– Diego wanted to leave the herd.
– There is a big dinosaur on their tail.

Do I need to draw a picture? Do you think these issues will be explained?

It makes sense that they introduce dinosaurs to the series even though apparently dinosaurs were extinct by the time of sabre toothed tigers and mammoths, to be honest the Pixar film Cars was by far their weakest effort, but it made them a mint. I have an almost three year old, and as such go to a heap of kiddie parties, and at every one there are multiple kids wearing Lightning McQueen emblazoned attire, so if you make a dodgy film that catches the eye of toy-hungry kids, you’ve got a hit on your hands regardless.

What let DOTD (not Dawn of the Dead) was that it finally sold out and went for pop culture references, most notably a shameless Flintstones effort, but also a red / blue wire “explosives” disarming scene, and in my mind worst of all a pretend mobile phone call. Yes it’s a cartoon. Yes animals don’t really talk, but fuck me mobile phones don’t exist in Ice Age times!

Highlights
– The visuals yet again push the scope of animation, compare 1 to 3 and the difference is amazing.
– Johnny Legz as Sid.
– Simon Pegg tries in an unnecessary role that I haven’t even bothered mentioning here. (But he talked like The Map from Dora the Explorer. Again, I have an (almost) 3 year old.

Lowlights
– Story is flimsy and finally isn’t backed up by gags.
– New characters (again) and new baby is grasping for straws.
– Even the in-house distraction Scrat has his own pointless sub-plot.

Look, I’m not bagging a movie that shamelessly guns for the pre-teen dollar, but the first film was just a good movie regardless of age, and the second at least tried to be decent. This is nothing more than a lazy merchandising cash grab. If you are 9ish you’ll love it, but if you are the poor sap that takes the 9 year old to the movie, as Flavor Flav says “I can’t do nuttin’ for ya’ man”.

Final rating – 6 / 10. Being a fan of the first it annoys me to say this. Ice Age 3 is exclusively a kid’s movie. If you are a parent, wait for the DVD, as you don’t want to watch this in a cinema.